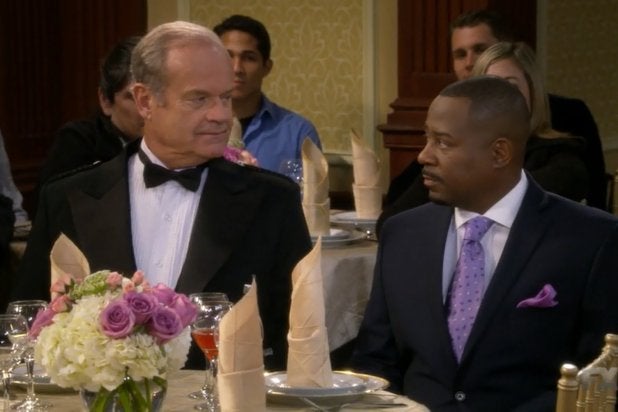 The latest 10/90 comedy project has launched, and it proves what star power can do. With comedy veterans Kelsey Grammer and Martin Lawrence in the lead roles, “Partners” already brings more consistent laughs then FX’s other 10/90 project, Charlie Sheen‘s “Anger Management.”

Unfortunately for Sheen, he’s forced to do the lion’s share of the work alone on his show, while “Partners” is able to play off the differences and chemistry of its lead characters.

Also read: FX: Let’s All Be More Patient About Ratings

Lawrence plays Marcus Jackson, a beloved community activist and lawyer going through a tough divorce. It’s through those divorce proceedings that he meets Grammer’s Allen Braddock, an arrogant blowhard who’s just been fired from his father’s law firm.

After Grammer helps Lawrence in his divorce case, Lawrence reluctantly agrees to take Grammer on as a partner in his practice. The comedy ensemble is fleshed out in the firm’s staff as well as through Lawrence’s mother, played by Telma Hopkins, and his daughter living upstairs, while Grammer’s stepdaughter is a spoiled constant presence as well.

Like most 10/90 projects, “Partners” is straightforward in its approach. After all, should the 10-episode initial order warrant a “back 90” pickup, the production schedule is going to be brutal as the show tries to get out those 90 episodes as quickly as possible. That means limited sets with shorter writing and filming times.

But before it can have that happy problem, “Partners” needs to find an audience with these first episodes. Grammer and Lawrence are well-known comedians, but they certainly don’t have the kind of buzz Sheen did when “Anger Management” started. He was just coming off his high-profile firing from CBS’s “Two and a Half Men” and a bizarre comedy tour.

Still, nostalgia television has been doing well on networks like ABC Family (“Melissa & Joey”) and TV Land (“Hot in Cleveland”). Comedy veterans are finding a whole new life on cable with throwback shows that remind fans of their classic sitcom roots. And there’s a lot in “Partners” for fans of “Frasier” and “Martin” to appreciate.

But mostly it’s the chemistry between Grammer and Lawrence, which is stellar. The success of the show will fully hinge on people buying into their friendship/disdain, and the actors sell it perfectly in the first two episodes, which aired Monday night.

The first episode set the stage, with Grammer’s just-fired lawyer coming to the aid of Lawrence, who was about to agree to a terrible divorce settlement. Grammer’s under-handed ways may not have set well with Lawrence, but Grammer helped him discover that his wife was cheating, thus helping him not get totally screwed in the divorce.

After that, the two became reluctant partners. Their “odd couple” chemistry got a chance to really shine in the second episode, which saw them pretending to be a gay couple planning a wedding. Thrown into this level of emotional intimacy so early in their partnership showed both their differences, and how they complement one another.

Grammer has been hit or miss with his television career post-“Frasier” (2009’s “Hank” was particularly disastrous), while Lawrence has mostly stuck to films. It looks like they may have finally found a project that allows them both to shine best in what it is that they do, while elevating the average quality of these 10/90 projects considerably.

It’s not going to change television, but it does generate consistent laughs. And isn’t that what comedy is supposed to do?