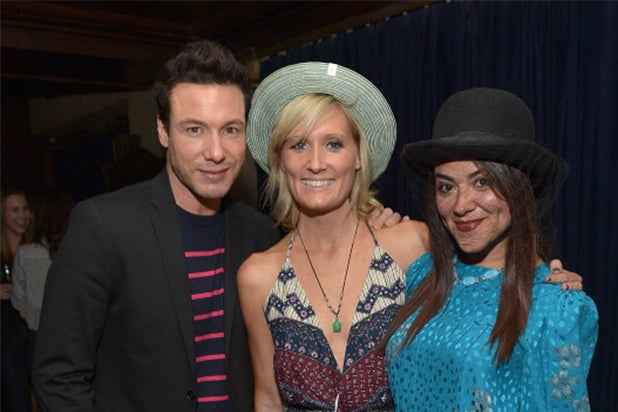 If Jessica Simpson, Eva Longoria, or Forest Whitaker emailed you “hidden gem” travel advice for Europe, would you follow it blindly?

If they were your friends, you might. Angie Banicki did.

Banicki, the Hollywood relationship-farmer best known for warming up brands, celebrities, and industry leadership in social stews together, harvested years of her celebrity pals’ travel tips – gathered on endless European press tours, location shoots, and vacation escapes – to set off on an freestyle solo tour that became a book.

“30 Before 30: Traveling Under the Influence” is Banicki’s travelogue of her brief Hollywood-scene sabbatical.

Using the “tell-only-your-best-friends” European tips from pals like Ben Silverman, Minnie Driver, Kevin Nealon, Donald Sutherland, and manager Chris Huvane, she took their fortune-cookie sized morsels of sometimes half-accurate, half-remembered proper nouns, mixed in some relationships paid-forward, and set off like a Goonie to chase down her own treasure – time away from the scene.

On Wednesday night, she dished out her own travel advice: “Come to the Spare Room at the Roosevelt for my book launch party.”

Robert Pattinson, Michael B. Jordan, Camille Guaty, Rocco DiSpirito, and Moby (above left) said “OK,” and were amongst the 60 industry and talent names diminishing the stack of hard copies next to the bowling lane at the second floor speakeasy. (It’s not just a digital vanity project.)

No carpet. No paparazzi tipped off outside, and most like rooms of cross-industry success, it was as relaxed and off the grid as the newly printed insight.

“Movember” co-founder Adam Garone (who doesn’t start growing his own ‘mo until Halloween) with Banicki.

With the signage, carpets, and trappings of AFI’s impending festival creeping across the party spaces of the Roosevelt other social connectors on the fun side of the rope included producer and party host Brett Gursky (currently suffering through the promoter-specific syndrome of “Birthday Week” and keeping his fingers crossed for a Season 2 pickup on HBO’s “Hello Ladies,” where he consults), Pantera Sarah, Jen Birn, Michelle Pesce, and DJ Ryan (“Mr.”) Best – a degree-commercial type evening for him with Moby’s ears on the sound in the room.

Sample “30 Before 30” takeaway: Escape the theatre crowd in London’s Covent Garden by finding the mythical “Honesty Bar.” You just have to find and befriend the fat man who’ll open the hidden door within the secret library at the Covent Garden hotel.

Chris Huvane’s original email tip just said: “Go to the honor bar.” That’s a crash-course in how Banicki course-corrects on both continents.