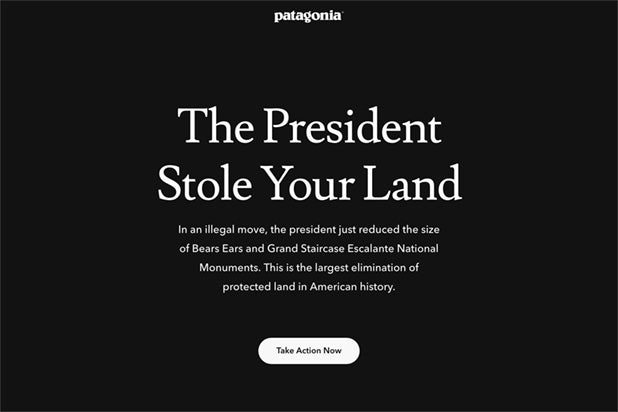 Outdoor clothing retailer Patagonia has threatened legal action against the Trump Administration over it’s decision to scale down protected lands in Utah.

The company’s homepage was changed on Monday to feature a black screen with the text “The President Stole Your Land,” and a link for shoppers to learn more about the issue.

“Americans have overwhelmingly spoken out against the Trump Administration’s unprecedented attempt to shut down our national monuments,” Rose Marcario, President and CEO, Patagonia said in a statement. “The Administration’s unlawful actions betray our shared responsibility to protect iconic places for future generations and represent the largest elimination of protected land in American history. We’ve fought to protect these places since we were founded and now we’ll continue that fight in the courts.”

Also Read: Joe Scarborough: Many Republicans Say Trump is 'Unstable' When Cameras Are Off

Donald Trump announced plans to shrink Utah’s Bears Ears National Monument by about 85 percent in a speech from the state capitol on Monday. The plan will also reduced the size of Grand Staircase-Escalante by about half.

“Some people think that the natural resources of Utah should be controlled by a small handful of very distant bureaucrats located in Washington,” Trump said in the speech, according to the New York Times. “And guess what? They’re wrong.”

“[Patagonia is] proud to stand alongside over 350 businesses, conservation groups and Native American tribes that have come together on this issue to protect public lands,” the company said. “Climbers, hikers, hunters and anglers all agree that public lands are a critical part of our national heritage and these lands belong not just to us, but to future generations.”