Following Tuesday night’s performance of “Company,” actress Patti LuPone minced no words when she called out an attendee for not wearing their mask properly.

A video posted to Twitter captured the actress, who plays Joanne, engaging with the theater-goer.

“Put your mask over your nose!” LuPone began. “That’s why you’re in the theater. That is the rule. If you don’t want to follow the rule get the f— out!”

LuPone continued as the crowd applauded and cheered.

“Who do you think you are that you do not respect the people that are sitting around you?” she said.

“I pay your salary,” the audience member responded.

Chris Harper is the Elliot & Harper producer credited with reviving Company for Broadway.

“Who do you think you are? Just put your mask over your nose,” LuPone repeated, to which the attendee said “A patron! A person!”

The revival of the work by the late Stephen Sondheim earned nine Tony nominations Monday, including best revival of a musical and best performance by an actress in a featured role in a musical for LuPone. 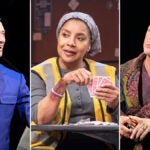 According to Vanity Fair, LuPone’s remarks follow her break from the stage after testing positive for COVID-19 in late February. After taking a week off, LuPone returned to the production.