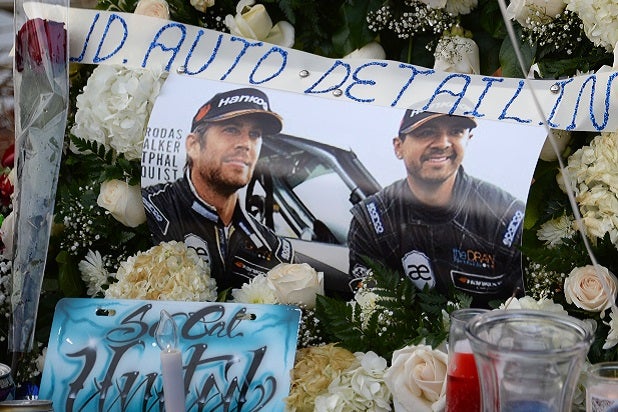 Thousands of fans – many in muscle cars and on motorcycles – gathered on Sunday to pay tribute to Paul Walker at the Santa Clarita site where the “Fast & Furious” actor died in a car crash last weekend.

Word of the unofficial memorial spread via social media, and before the noon start time, mourners were crowding the area to honor the fallen star with flowers, candles and other tributes and traffic was backed up for miles. Onlookers, many with their families, withstood temperatures in the 40s as they passed by the site in a steady stream throughout the afternoon.

Walker, 40, died when the Porsche Carrera GT he was riding in smashed into a light pole and tree and then burst into flames. The actor’s friend Roger Rodas, 38, was driving and also died in the crash. Many of the fans at the memorial signed their names on a large billboard with a picture of Walker and Rodas.

Some fans arrived in built-for-speed vehicles like the ones featured in the “Fast and Furious” movies and favored by the action star, and revved their engines in tribute. L.A. County Sheriffs were out in force to direct the traffic caused by the huge turnout.

Patrick Yanez went to Home Depot Sunday morning and convinced store officials, he said, to donate a Christmas tree that he brought to the memorial and erected in the middle of an expanding shrine of candles, photos and flowers.

“I wanted to do something for the gang here and especially for the two who died. I went to Home Depot and asked for their cooperation and they came to the plate and gave us a hand,” he told the Santa Clarita Valley Signal.

Shrine attendees clapped and whistled when Yanez set up the tree by the shrine and wished everyone a “Merry Christmas.” The tree took its place among an expanding display of candles, photos and flowers.

“I’m a father. I can relate,” he said, explaining his gift of Christmas tree and decorative bulbs.

Walker was in Santa Clarita for a fundraiser his charity, Reach Out Worldwide, organized for victims of the recent Philippines typhoon. The event took place at Rodas’ shop, and the two stepped away for what was supposed to be a short drive in Rodas’ car.

Walker, along with Vin Diesel, was a key player in the “Fast and Furious” movies and distributor Universal Pictures has shut down production on the seventh film in the series while it figures out how to proceed without him.