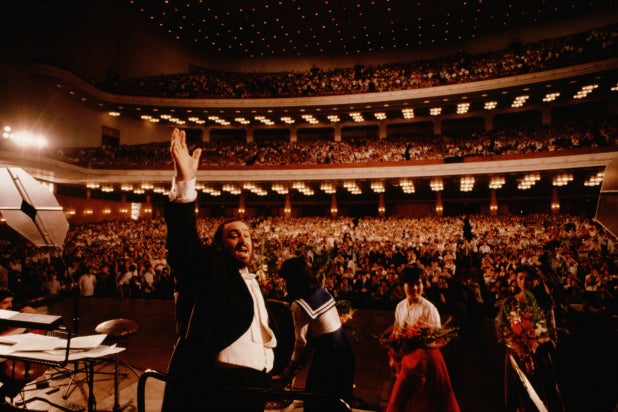 Watching Ron Howard enlist an all-star cast of experts, industry luminaries and celebrities to catalog Luciano Pavarotti’s many, many achievements as a singer, it’s easy to think that the filmmaker chose hagiography as his preferred storytelling format for the new documentary “Pavarotti.”

But in exploring a career distinguished by industry-changing benchmarks, and a life driven by the opera superstar’s irrepressible charisma that even his ex-wife cheerfully forgives his transgressions, Howard can be forgiven for showing his subject the same generosity that Pavarotti extended to the world through both his art and his personality.

A celebratory but thoughtful overview of Luciano Pavarotti’s life, loves and career, “Pavarotti” skillfully chronicles the larger-than-life performer’s transformative impact on the opera industry, as well as upon the people that he encountered, professionally and personally, during his more than 50-year career.

Utilizing a wealth of broadcast footage from his earliest days to his last, as well as vintage photographs and home movies from his loved ones, “Pavarotti” draws a surprisingly specific portrait of the singer from his earliest days in Modena, Italy, where he grew up the son of a baker and a cigar factory worker, to the world icon he’d become by the time of his death in 2007. After training as an elementary school teacher, Pavarotti decided to pursue singing full time at the age of 20 and took on odd jobs while his wife Adua supported him and their four daughters. After making appearances in regional opera houses, he graduated to international venues in 1963, eventually earning the title “the King of the High Cs,” a significant distinction even among the most gifted singers in his field.

In interviews with contemporaries like Placido Domingo, Howard underscores how unique Pavarotti’s voice was — that “it seemed easy” for the singer to sustain notes that few other could. But the filmmaker also showcases how a powerhouse talent like his could also be painfully nervous before every performance, and what emerges from the concert footage is not just Pavarotti’s exhilaration from moving crowds by the millions across the globe, but also a sense almost of relief.

Though he was both physically imposing and a tremendously large personality, the recurrent theme of interviews with friends, family and colleagues is how disarming he was — how he would make the people he met feel special rather than the other way around — which both concert and private footage underscores in clip after clip.

Howard also explores how Pavarotti changed the way that opera was sold and, more broadly, revolutionized the industry as a whole to recognize the commercial power of putting these singers on the same level as pop and rock artists. He first worked with Herbert Breslin, “the most hated man in opera,” who sent him on tours and created opportunities for Pavarotti to become an international superstar, and then collaborated with rock promoter Harvey Goldsmith, who hired him for a 12-night gig (originally designed for Bruce Springsteen) that completely changed the way audiences consumed opera. This eventually led to his “Three Tenors” performance with Domingo and José Carreras, which reached more people than ever before and made him a household name.

But even as he was performing to record audiences and exploring new formats both live and recorded, Pavarotti retained a seat-of-the-pants bravado, a pure, unworried enjoyment of his experiences that suggests he was less interested in leveraging his success for personal gain than exploring what could be done — and more specifically, what hadn’t yet been done. In one scene, former record executive Michael Kuhn recounts the time he was instructed to ream Pavarotti for violating the terms of his contract by recording for Adua’s record label, and as an explanation, the singer replied simply, “life’s too short.”

In another interview, U2 frontman Bono remembers how Pavarotti and his camera crew wheedled his way into the studio where the band was recording in order to bully them into performing at a benefit. He understood the power he wielded as an international celebrity and utilized it when needed, but never to satisfy his ego, or for his own edification.

That said, Pavarotti’s loves, and his children, dominate a healthy portion of the film’s almost two-hour running time, and they add important shades of grey to its portrait of his talent and charm. He was in many ways stereotypically gregarious — a performer on stage and off — but the consistent thread in these interviews, even when they turn critical of his philandering and infidelities, is how earnest his affections were. Whether it was opera or fame or food or women, Pavarotti was a man who loved them all sincerely and wanted love in return.

As a result, Howard’s film is a love letter to the icon, but ultimately “Pavarotti” is a more of a celebration of the individual behind that façade and a reminder that it’s as much his humanity as his talent that made him a star.