Peacock is peeling away the layers of America’s fixation on true crime.

The streamer announced a straight-to-series order Monday for “Based on a True Story,” a dark comedy about about a realtor, a plumber and a former tennis star whose lives unexpectedly collide to expose America’s obsession with true crime and murder.

Roxie Rodriguez serves as co-executive producer for Aggregate Films. The series will be produced by UCP, a division of Universal Studio Group. 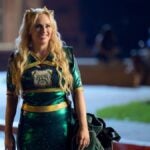 “Inspired by real events, ‘Based on a True Story’ explores America’s obsession with true-crime and serial killers,” Lisa Katz, president scripted content, NBCUniversal Television and Streaming, said in a statement. “Along with our colleagues at UCP, we’re thrilled Craig Rosenberg, Jason Bateman, Michael Costigan and Roxie Rodriguez have partnered with Peacock for what is sure to be a wild ride filled with unexpected twists and turns and lots of humor.”

In a statement of her own, Beatrice Springborn, President, UCP, said: “There are some true stories that are stranger than fiction as is the case for the events that inspire this show. It is a twisted, thrilling and incredibly funny series that combines the comic and suspense talents of the dream team of Craig Rosenberg, Jason Bateman, Michael Costigan and Roxie Rodriguez to create the perfect show for Peacock.”