“Peaky Blinders” Season 6 finally has a U.S. premiere date on Netflix. The show will return on June 10.

Season 6 is the last installment of the Birmingham, England-set period crime drama. It spans six episodes and began rolling out in February in the U.K.

According to Radio Times, the show set a record for TV viewing in Britain, netting 3.8 million viewers for the premiere, with a high of 4.1 million. 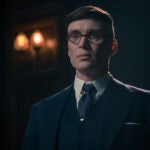 Set in Birmingham, England, “Peaky Blinders” takes place after World War I and stars Cillian Murphy as Tommy Shelby, a powerful member of the Shelby crime family. The fifth season of the show aired on BBC One in the fall of 2019 and launched on Netflix on Oct. 4, 2019.

Anya Taylor-Joy also reprises her role from earlier in the series in Season 6.

Speaking to Rolling Stone U.K., ahead of the show’s return, Murphy previewed a gripping final season.

“Peaky Blinders” first made its debut in 2013. It comes from creator Steven Knight.