Spoiler alert: This story contains a major plot detail from the first episode of HBO Max’s “And Just Like That…”

Peloton stock is down about 12% since the premiere of HBO Max’s “Sex & the City” sequel series, “And Just Like That…”

What’s the tie-in? Well, in Episode 1 of the revival, Carrie’s (Sarah Jessica Parker) husband Mr. Big (Chris Noth) dies after suffering a heart attack after riding his Peloton stationary bike. And just like that… the company’s stock price dropped more than $5 per share.

To be fair, this morning’s continued-sinking stock price probably is not entirely about Carrie’s loss. Credit Suisse also downgraded Peloton from “outperform” to “neutral” as people begin to head back to the gym. 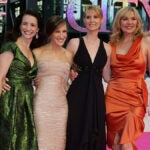 Also Read:
Peloton Isn’t Happy About That Shocking Death in ‘And Just Like That…’ Either

As of Friday’s stock-market open, Peloton (PTON) shares were priced at $40.47. The stock closed Wednesday at $45.91 per share. Within the first 15 minutes of this morning’s trading, PTON shares were under $40 for the first time since early on in the COVID-19 pandemic. Peloton’s market cap fell below $13 billion.

Peloton’s market cap was north of $40 billion in the months leading up to the global coronavirus pandemic making landfall in the U.S.

The first two episodes of “And Just Like That…” were released early Thursday morning at 3 a.m. ET/12:00 a.m. PT. Peloton has spent those 24 hours (weirdly) in damage-control mode.

“I’m sure ‘SATC’ fans, like me, are saddened by the news that Mr. Big dies of a heart attack. Mr. Big lived what many would call an extravagant lifestyle — including cocktails, cigars, and big steaks — and was at serious risk as he had a previous cardiac event in Season 6,” the company wrote in a statement from Dr. Suzanne Steinbaum to Us Weekly. “These lifestyle choices and perhaps even his family history, which often is a significant factor, were the likely cause of his death. Riding his Peloton bike may have even helped delay his cardiac event.” 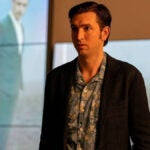 Steinbaum, a cardiologist and member of Peloton’s Health & Wellness Advisory Council, also pointed out the statistic that “more than 80 percent of all cardiac-related deaths are preventable” through “lifestyle, diet and exercise” changes.

“While 25% of heart attacks each year are in patients who already had one (like Mr. Big), even then they are very, very treatable,” she told the mag. “It’s always important to talk to your doctor, get tested, and have a healthy prevention strategy. The good news is Peloton helps you track heart rate while you ride, so you can do it safely.”

The first two episodes of “And Just Like That: A New Chapter of Sex and the City,” are available for streaming on HBO Max.