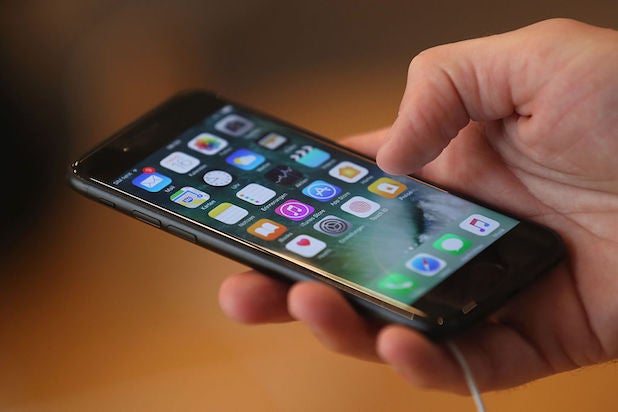 BERLIN, GERMANY - SEPTEMBER 16: A visitor tries out an Apple iPhone 7 on the first day of sales of the new phone at the Berlin Apple store on September 16, 2016 in Berlin, Germany. The new phone comes in two sizes, one with a 4.7 inch display, the other with a 5.5 inch display. (Photo by Sean Gallup/Getty Images)

Community is a “conversation platform” that celebrities like Debra Messing, Jennifer Lopez, the Jonas Brothers, Kim Petras, Kerry Washington and Ellen DeGeneres use to communicate with fans. People Magazine is the first media brand to join their ranks and will officially kick off the partnership Sunday, when readers can receive Community-exclusive Oscars content from the magazine during the Oscars by texting 212-479-1704.

“At People we’re all about meeting our users where they are and tailoring content to the platform they’re on,” said Zoë Ruderman, editor of People Digital, in a Tuesday statement. “This partnership lets us take that relationship with our audience to the next level and add an element of real interactivity. We’re excited to text with our community about everything from breaking royals news to the best looks on a red carpet-and do it all in a way that is familiar, fun and personal.”

The idea of communicating with readers via text isn’t necessarily new. Some newspapers, like Advance Local’s Cleveland.com, have been testing out subscription models that enable consumers to communicate directly with local reporters about goings-on in the community.