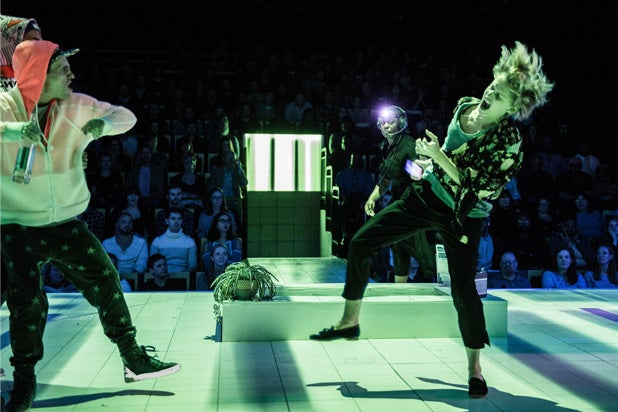 Denise Gough, the lead actor, isn’t just good. She’s great playing Emma, an actress-addict who just can’t stop imbibing every drug known to man and swilling it down with the nearest alcoholic beverage.

Emma is also wildly funny when she’s high on stage and off, and unlike most addicts, she remains so even after detox. Her comment that she’s a very good driver and “drove here” when checking into the rehab center brings down the house at St. Ann’s. She also delivers a very witty and insightful take-down of a therapist (Barbara Marten). It’s the next best thing to a great stand-up act, and Macmillan can be credited for giving Emma all the fabulous one-liners.

Unfortunately, he saved nothing but platitudes for the therapist and all the other patients who have to endure therapy sessions with the volatile and far more articulate Emma. “Surrender doesn’t mean defeat,” she is told when the 12-step program is explained to her.

The therapist character is the kind of role that the late Marian Seldes used to play. Then those roles went to Kathleen Chalfant. Seldes and Chalfant, however, brought more than a modicum of edge to such super-efficient professionals.

Marten, on the other hand, is so quietly superior and self-satisfied in her reactions to Emma that her therapist verges on parody. I expected the other Dr. Scholl’s to drop, but both orthopedics remain firmly on Marten’s grounded feet throughout the play. The therapist isn’t a charlatan. She isn’t a hallucination. She’s the voice of God. Since Emma never fails to galvanize our attention by being the contrarian, it’s a disappointment when such a vital character has to capitulate to such a dreary cliche.

Whenever the 12-step talk interrupts one of Emma’s fascinating tirades, director Jeremy Herrin invariably comes to the rescue. “PP&T” may be the first drama to visualize drug withdrawal as a walk through a malfunctioning discotheque. Flashing lights (James Farncombe), throbbing music (Matthew Herbert), earsplitting sound effects (Tom Gibbons) and hallucinatory projections and videos (Andrzej Goulding) practically make you want to jump up and join the fun on stage.

Equally dazzling are the many Emmas who join Gough during some of these high-tech melees. It’s both creepy and fascinating when the stage does somersaults in act one, so it should come as no surprise when Herrin feels the need to repeat the stunt in the far weaker second act.

Also Read: 'The Last Match' Theater Review: Tennis Without the Suspense or Drama

The 12-step program includes making amends. Emma and her fellow patients prepare for these encounters by doing improvisations, projecting what might happen when they ask for forgiveness. Actors seem to like improvisations, but I’ve always found them unendurable to sit through, and “PP&T” does nothing to alter that opinion.

Boredom aside, Emma’s group sessions leave her completely unprepared for her amends. The one-sided confrontation that ends the play leaves Emma so vulnerable and crushed that she should sue her rehab center for malpractice.

Postscript: Bryan Singer Productions is credited as one of the producers. Michelle Williams was in the audience at the critics’ preview. You do the math.