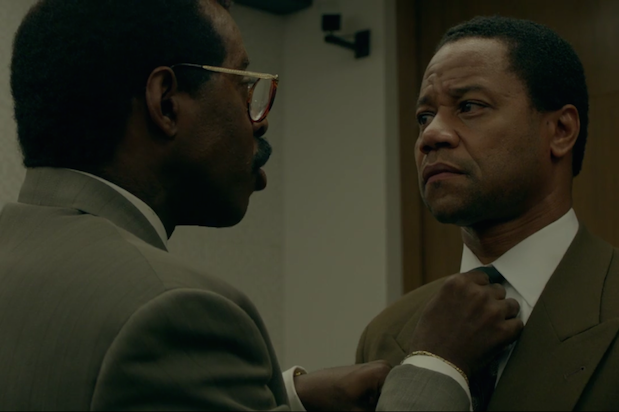 (Spoiler alert: Please don’t read on if you don’t want to know anything about the finale of FX’s “The People v. O.J. Simpson.”)

Larry Karaszewski and Scott Alexander know there’s an Internet joke about Tuesday’s finale of their series “The People v. O.J. Simpson”: There’s no mystery about how it ends.

The writers and executive producers say the drama isn’t rooted in the (spoiler alert) not guilty verdict for Simpson, but in how it plays out for everyone else.

“Scott and I always knew that we had enough drama and story and things that people didn’t know and complexities to the case that the first nine episodes would really compel people,” Karaszewski told TheWrap. “But when you got down to the verdict, we knew that was going to be a difficult execution. What we discovered is actually knowing the verdict gives the episodes so much more power.

“There’s this ‘United 93’ type of feel,” he continued. “Because you know this outcome is about to happen that is about to destroy most people’s lives in the case, there’s a sense of dread that builds. This episode, more than any other, the fact that you know what’s going to happen, I think gives it more power.”

“This is going to be a tragedy for every character except for Johnnie [Cochran] … O.J.’s the worst thing that ever happened to these people. As important as the trial was, it left everyone’s life in tatters. We did want to play that out to give the audience closure with all the characters,” he explained.

“We don’t want this to feel like a triumph for O.J. Simpson. We want the audience to feel like he’s never going to go back to being ‘the Juice’ that he was before this all started. There’s no triumph for anybody except Johnnie Cochran, who got his message out,” Scott added.