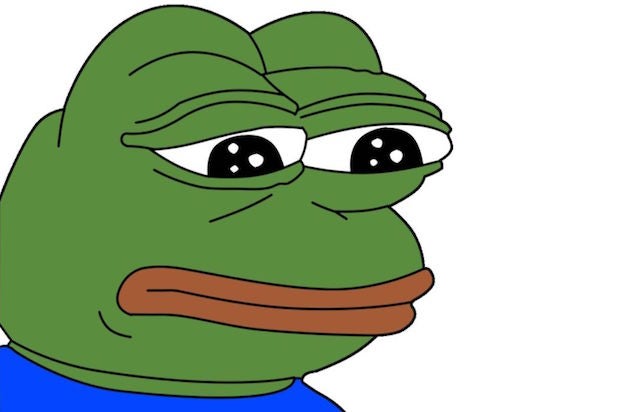 The creator of Pepe the Frog, a cartoon character that was hijacked into a racist meme and hero of the alt-right, says he’s voting for Hillary Clinton.

Artist Matt Furie said in an interview with Esquire that he never imagined his once-beloved character — known for the catch phrase “feels good, man” — would make anybody feel bad.

“I woke up one morning to a flood of emails and calls from media trying to interview me. I had never heard of the alt-right or any of that stuff — even white nationalism — I don’t know about that s—,” he told Esquire. “I blame Trump for all of this, because he kind of looks like this smug Pepe meme. Now it’s just this runaway train. But the people who are driving this train are these anonymous Internet trolls who don’t stand for anything except for nihilism and getting a rise out of whatever racist or sexist or disgusting thing they can do.”

Also Read: What Is Pepe the Frog? A Short Explainer of the Alt-Right Meme Mascot

Because of his appropriation by the alt-right, the Anti-Defamation League has listed Pepe as a symbol of hate. Furie thinks that’s unfortunate: “It’s not going to do anything other than give this fringe racist group more attention than they need,” he said.

He also explained his own politics: “I’m voting for Hillary for sure. I was a big fan of Bernie, but that fizzled out, so I’m all Hillary 2016.”

How did the frog become a hate symbol? This Wrap post and the latest Reply All podcast (entitled “The Grand Tapestry of Pepe”) explain it thoroughly, but here’s the abbreviated version.

Furie drew lots of cartoons called “Boys Town” between 2010 and 2012 with characters that included a wolf, a bear and a dog. In one installment, someone says to Pepe, “I heard you pull your pants all the way down to go pee,” to which Pepe guilelessly replies, ‘Feels good, man.'”

That became a meme. But when pop stars like Katy Perry and Nicki Minaj joined in the fun, some Internet trolls decided to make Pepe so repugnant that no one in the mainstream would ever borrow him again. That led to people making Pepe illustrations in which he was associated with horrible things, including racism.

From there, actual racists came to embrace Pepe. And he began popping up in memes supporting Donald Trump, including one posted earlier this month by Donald Trump’s son, Donald Trump, Jr.:

Noted racist David Duke posted another “Deplorables” image that included himself Photoshopped into the group.

Hillary Clinton’s campaign website subsequently released an explainer on Pepe saying that he was “more sinister than you might realize.”

All of which is, as you can imagine, very weird for Furie.