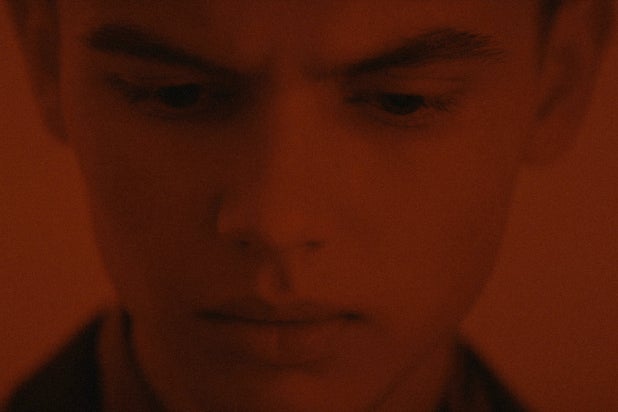 In Eddie Alcazar’s debut feature “Perfect,” beautiful nymph-like models lounge around a Lautner house digitally transported into a waterfall fantasy land, and not a whole lot seems to mean anything. Alcazar has flip-flopped roles with his collaborator, musician-filmmaker Flying Lotus, for whom Alcazar acted as producer on the gross-out horror anthology film “Kuso.” Now Flying Lotus is producing (and acting as composer) for this sci-fi anti-morality tale — released under the “Steven Soderbergh Presents” banner — that frustrates as much as it visually dazzles.

The film opens with a distraught young man (Garrett Wareing, “Pretty Little Liars: The Perfectionists”) calling his chilly mother (Abbie Cornish) on a 1980s landline to beg her to come home and fix his mess. The mess in question is the nude corpse of his girlfriend, drenched in her own blood. When mom whisks her son away to a kind of modernist rehab, it seems as though he might go through the motions of repentance or soul-searching, but the fact that the man murdered his girlfriend in a heated moment of passion doesn’t seem to figure into the story as more than an impetus for the man to realize he possesses a primal animal brain, and nefarious people are attempting to purify him by making him cut out literal hunks of his skin and replace them with synthetic versions.

There’s an interesting statement to be made there, if muddled and a bit frightening, as the film’s omniscient narrator tends to wax on about truth and violence with the nuance of a freshman poetry student hanging out on MRA forums to talk about the dangers of feminization. “Once you know the truth, you can’t un-know it,” the narrator says, as though he throws around the term “red-pilled” in every online interaction with women.

Alcazar and co-writer Ted Kupper likely aren’t the type to hype extremely online toxic dogma, but there’s a lack of control and specificity in their themes and how they play out, so it’s never quite clear why the filmmakers are telling this story and what they’re trying to get across. In this case, there’s a little too much show and not enough tell, but the “show” can be extraordinary.

Alcazar has clearly worked in fashion films and commercials, because the slick production easily melds sophisticated computer animation and effects with eerie, naturalistic beauty. The more successful theme — if you can even call it that — of this film has to do with the constant butting heads of the “primitive” and the “modern.” The young man’s phone is a boxy beige cordless thing of utilitarian nature, for example, while high-tech laser technology runs the rest of the house.

Director of photography Mattias Koenigswieser (“Christopher Robin”) savors a phantasmagoria of pastels. Camera movement is fluid; choreographed single-take shots often travel along the entire length of this Lautner architectural wonder, while humans move in and out of frame. In some chilling scenes, the characters are transported to a primitive village, all colors drained to black and white. The young man’s body is caked in mud, and the depth of picture is such that every flake of that mud feels fully textured. Still, Koenigswieser’s talent is better realized in Marc Forster’s trippy 2017 domestic drama “All I See Is You,” because there his cinematography doesn’t bear the burden of creating story from nothing.

Though Wareing, Cornish, and their castmates perform perfectly well, their efforts are mostly in vain. At one point, Wareing devours a peach, crushing it all over his face, the juice and pulp dripping to a glass tabletop until Wareing smashes his face in the mess and smears it around in a fury. What does that scene have to do with the story? No idea. But Wareing’s dedication to a full-body performance has him self-mutilating, dragging himself across shiny floors, and writhing in a haze of violence and confusion.

What seems to be conspicuously lacking from the film is something that was in abundance in “Kuso”: Humor. There’s a single line that could potentially be construed as funny. It comes when the young man has successfully replaced a bunch of chunks of his body and still feels pangs of violence when he’s with a woman. A woman’s voice comes through the intercom in the man’s room. She’s been guiding and coaching him since his arrival. He asks her if how he’ll ever be able to connect with another person. The woman says, “Maybe through a radio.” It’s a dry, lovely line of absurdism, and the film would have done well with some more of those.

Of course, you can’t discuss this film without praising the Flying Lotus score, which traverses the spectrum from synthy ’80s darkwave like John Maus to lush and tense string compositions you might hear from Mica Levi. Combined with eerie, exaggerated sound design from Jacob Flack and sound effects editors Danielle Price and Timothy Preston, “Perfect” becomes a sumptuous aural experience. The sheer number of artisans creating great work on this film does become a disappointment, though. Without a proper story or dialogue, what good is skin-deep beauty?