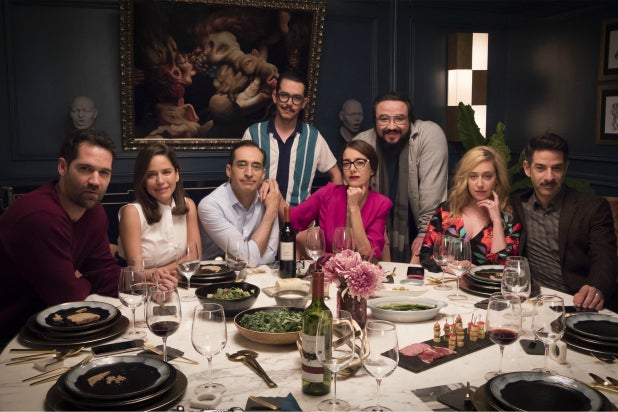 Tapping into our cell phone-obsessed zeitgeist and harnessing marital disputes for incendiary plot twists, Italian director Paolo Genovese (and a team of four other writers) unleashed an international craze in 2016 with their wildly profitable and easily adaptable dramedy “Perfetti sconosciuti.”

Genovese’s feature — about a group of secretive friends (three couples and a single man) having dinner who test their trust in each other by agreeing to place their devices on the table and answering all text messages, phone calls, and other notifications out loud for everyone to hear — has been adapted in multiple nations around the world, from South Korea to Turkey, with Spanish auteur Alex de la Iglesia’s 2017 version being one of the more notable iterations.

Now, the phenomenon arrives in Latin America, guided by one of the region’s directors who is most up to the task of remaking a tale about upper-class relationships in decay: Manolo Caro. A writer-director who started in the theater, Caro has found notable recognition in his native Mexico thanks to edgy romantic comedies and more recently with the Netflix original series “La Casa de las Flores,” a melodramatic saga centered on a wealthy matriarch trying to keep her family together after a stunning revelation shakes its foundation.

Caro’s episodic venture for the streaming titan quickly became an online sensation due in part to actress Cecilia Suárez’s hilariously soft-spoken character. In Pedro Almodóvar/Penélope Cruz fashion, Suárez is Caro’s muse and has starred in most of the filmmaker’s major projects, including his retelling of “Perfect Strangers” (“Perfectos Desconocidos”).

Suárez leads the ensemble cast, comprised of many of Caro’s favorite performers, as Eva, a therapist unable to establish a functional understanding with her teenage daughter and out of touch with her husband, Alonso (Bruno Bichir, “Narcos”). On the night of an eclipse that heightens superstitious beliefs, she invites her closest friends over for a casual gathering that turns into an emotional bloodbath as the indiscreet cellphone game unravels.

Few things today are as universal as the unnerving and ubiquitous Pandora’s boxes mobile devices have become, perpetually on the brink of spilling dark secrets. In that regard, Caro banks on what’s been proven to work and follows the formula of the source material to a T with the same predicaments, outcomes, and setting. Character archetypes created by the Italian screenwriters are simply translated to the Mexican elite, with Caro’s cast even sometimes resembling the original actors.

Nevertheless, Caro’s ability to localize what might feel broad shines through, even though he is operating within set storytelling boundaries. While English-speaking audiences won’t notice, the dialogue in “Perfectos desconocidos” incorporates colloquial Mexican jargon and maximizes humorous situations by adding cultural specificity in the details. A plot point addressing homophobia rings doubly relevant in this Mexican context, where machismo and intolerance remain problematic, to say the least.

From a craft standpoint, Caro’s cinematographer for this film and for “La Casa de los Flores,” Pedro Gómez Millán, was faced with the same hurdle as all other DPs lensing global takes on the Italian goldmine: imbuing visual dynamism into a narrative that unfolds mostly around a dinner table inside an apartment. Gómez Millán’s framing and subtle but effective camerawork, in tandem with fast-paced editing, pleasantly accomplishes that feat, preventing the movie from falling into a claustrophobic rut. And while theatrical stillness isn’t entirely eradicated, the film never feels like a prerecorded play.

Aside from Suárez’s elegantly cutting turn as the troublemaker orchestrating the bare-all challenge that is almost certain to lead to the demise of marriages and friendships, actresses Mariana Treviño (Netflix’s “Club of Crows”) and Ana Claudia Talancón (“The Crime of Padre Amaro”) stand out as two disenchanted women learning disconcerting information about the men they thought they knew. Among the men, Bichir nails a sincere phone call with his rebellious daughter, even as his character is discovered to be hiding unflattering qualities.

Despite an esoteric final twist that conveniently simplifies what we’ve witnessed as a cautionary tale and a handful of moments when performances veer into unnecessary and unnatural grandness, “Perfect Strangers” remains thoroughly enjoyable and clever enough to inspire some reflection. The fear of being exposed is relatable, as is the guilt associated with deliberate misconduct, and that’s where the effectiveness (and translatableness) of this premise lies. As Eva deftly notes early in the film, “These devices have become the black boxes of our lives,” the only difference being that in this case, the black box is what might cause the crash.

With no American version in sight — the one that was being produced by The Weinstein Company fell through as the organization went bankrupt — U.S. audiences can, for once, look to their neighbors to the south for a tale that’s been riveting audiences across the world.