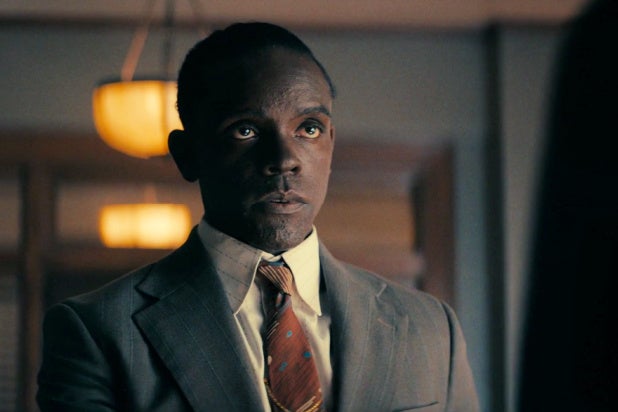 The first season of HBO’s reboot of “Perry Mason” is now in the bag, but we’re not done with these characters just yet as the network already announced a second season renewal a few weeks back. And as the season ended, Perry Mason’s crew was finally, officially assembled with Perry (Matthew Rhys), Della Street (Juliet Rylance) and Paul Drake (Chris Chalk) together in their office, ready to get to work.

For Paul Drake in particular, season 1 of “Perry Mason” was a fraught journey. He started the season as an LAPD street cop who just wanted to keep his head down and collect his paycheck so his wife and the child they were expecting could have a decent life. But he had an awakening of sorts, and in the finale — having realized he’ll never be able to fix the racist and corrupt LAPD from within — he turns in his gun and badge and starts a new life as Perry’s lead investigator.

In my mind, Drake has the most interesting character arc of anyone during the first season. Perry and Della, over the course of these eight episodes, never really decided to press on with the Dodson case — they just took the natural next steps. But Paul’s natural next step would have been to take the bribe money for his false testimony and keep his nose down. He had to make a change.

The obvious issue, of course, is that Della and Perry are still white, and Paul is still Black.

“In what world would he suddenly be like, ‘I’m completely safe now! It’s one year later and racism is dead!’ No, he’s still just surviving. And that’s the difference between Paul and Della. That’s the difference between Paul and Perry. Paul is still surviving. Whereas they have grand ideas about the future and their present and what they’re gonna do and save the world. Paul just has a new job, and we’ll see how it goes.

“It’s a new job, and we’ll see about these new bosses, but they’re better than the last bosses,” the actor said. “And that’s the difference in privilege in the ’30s. I got offered a slightly better job, so I had to take it. They planned this, they knew what they wanted.”

It’s important to keep in mind, though, that this probably only worked out because it was Drake who was nearby when the bodies of those kidnappers popped up. Della and Perry would have failed to defend Emily, and Paul would have kept on minding his own business. “He’d probably still be on the porch,” Chalk said. “He’d still be just happy to hang out with his wife and never would have crossed paths with these people. Never. Would have never happened. Those people don’t come to his neighborhood. It’s literally an impossible thing that has occurred. That has changed essentially all of their lives because of it.”

But things did work out, and a trio has formed. And whenever HBO can get around to making the second season of “Perry Mason,” Paul Drake is gonna have as much of the spotlight as Perry himself. Chalk told me he’s very excited to see what happens with his character, and he said he has faith in the creative team behind “Perry Mason” to do Drake justice.

Also Read: Why HBO Max's Sci-Fi Drama 'Raised by Wolves' Is Just Like 'Little House on the Prairie'

“I do trust that, based on the storytelling of season 1, it will deal with the amazing amounts of conflict that, one year later, you still have. He didn’t stop being African-American. He’s still got a newborn child. It’s still a new law firm. And his boss is still, you know, a Caucasian male who called him the n-word,” Chalk said.

“And I don’t imagine Paul has forgotten that. It’s choosing the lesser of many, many evils. Perry is trying his best to do his best, and I wonder what that’ll look like in an African-American community in the ’30s. That’s something I’m curious to investigate. Like if there’s a crime on that end, what happens? Does Perry put in as much effort? I don’t know. I’m curious. And it would be so fun to explore.”

The reason Chalk has that trust in whatever direction season 2 of “Perry Mason” might go is because, he said, the creative team started earning it from day one, starting with writers and co-creators Rolin Jones and Ron Fitzgerald. He said when he met with producer/director Tim Van Patten during the audition process, they had a very frank conversation. “We immediately started talking about race. I’ve been on shows where I’ve been there, and that was enough for the narrative. Like, it’s a Black person, we did our job,” Chalk said, before noting that he told Van Patten that he only wanted the Paul Drake gig “if I’m just a prop for white growth.”

“And it had never even crossed his mind. Like, he was very interested in telling what actually, what people really in their souls are going through. As am I. And I’ve been included in the process, and I had already been ready to tell this truth. I’ve definitely gotten calls from Rolin that are asking like, ‘What do you think of this situation? And what else do you think?’ So they’re definitely allowing me to be a part of the development as we continue.”

But it wasn’t just that conversation that sold Chalk on “Perry Mason.” The writing did just as much of the work for him.

“I read the role and was like, wow, they’re taking this guy home? They’re investigating this guy’s family. They’re dealing with his actual struggle. He exists when Perry doesn’t exist,” Chalk said. “All these things show me they actually care about the character. Because many times we see characters — Black characters, Asian characters, whatever, but I’m gonna speak specifically to Black men — we’ve seen Black men not have families but we hear about their families.

“It’s nice to be a part of something and not have to even push to exist on the show. Paul is imperative to the narrative, and that’s how they intended it…and so we’re luckily all on the same page. And it’s a small sign that things are evolving in our industry.”

So what gets Chalk excited to move forward with “Perry Mason” is having that dynamic behind the scenes fuel such a fascinating dynamic for the characters with Paul Drake, the traumatized Perry Mason, and Della, who is gay.

“We’re just lucky that this is the story of Perry Mason, who has hired two people who are very different from him. Which in and of itself creates an amazing amount of opportunity for honest storytelling,” Chalk said. “[Perry] is forced to deal with whatever his fragility is, because he’s got a woman who will never want to be with him, an African-American guy who there’s gonna be tension with. Inside of that is already a wonderful story. And in the time period, the 1930s, holy s—.”