"Tyler Perry’s I Can Do Bad All By Myself" will finish the weekend with $24 million, the third best opening for a Lionsgate-released Perry film, as well as the prolific producer’s top three-day performance for a movie that doesn’t feature his iconic house-dress-clad "Madea" character in the title.

In the first post-summer weekend box office — which was even lousier than the comparable weekend last year, dropping 8 percent, accordig to studio data — Focus Features’ animated "9" came in second, securing $10.9 million and bringing its five-day total to $15.3 million.

Apparently, it only takes a little Madea to open a Tyler Perry film these days.

The prolific producer’s "I Can Do Bad All By Myself" premiered to $8.6 million Friday, according to studio estimates, putting the Lionsgate-released title on track for a $24.3 million weekend, the best opening for any Perry film that doesn’t feature his iconic "Madea" character in the title (although, a house-dress-clad Perry makes a brief appearance as Madea in the new movie).

Opening at 2,255 locations, "I Can Do Bad" is unchallenged at the top of the  first post-summer weekend box office, with Focus Features’ Tim Burton-produced animated movie "9" on pace for a $10.2 million after opening on Wednesday, 9-9-09, to $3.1 million.

Meanwhile, starting out way below expectations were two R-rated scary movies, Summit Entertainment’s "Sorority Row" and Warner’s "Whiteout," both of which were predicted to finish the weekend in the high single-digit range. Neither will come close.

Starring Rumer Willis, "Sorority Row" kicked off to $1.9 million Friday and is on pace for a $5.3 million weekend.

"Whiteout," a more adult-targeted thriller starring Kate Beckinsale, took in $1.8 million Friday and is looking to finish its first weekend with a disappointing $5.1 million.

Besides having to compete with each other, both movies entered a market that already had two R-rated horror titles in active release, notably Warner/New Line’s "The Final Destination," which is on track for $5.3 million in its third weekend.

Other incumbents still going strong include Weinstein’s "Inglourious Basterds," which is set to surpass the $100 million mark Sunday with a $6.3 million weekend.

Summer is over. The kids are back in school. And box office is expected to shrink by over a third.

Not that the studios won’t be trying, with two more R-rated horror titles and a new Tyler Perry/Madea vehicle at hand. 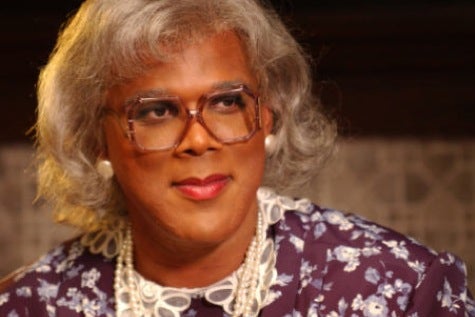 “Tyler Perry’s I Can Do Bad All By Myself” from Lionsgate, in fact, will enjoy the widest distribution yet for a Perry film with 2,225 locations.

Last year at this time, Perry’s “The Family That Preys” opened to $17.5 million on the way to a total gross of $37.1 million.  Lionsgate distribution head David Spitz said he expects a similar opening for “I Can Do Bad,” which features Mary J. Blige and Gladys Knight, as well as brief appearance by Perry’s Madea character.

“In his movies, when he appears as Madea, the grosses are a lot bigger,” says Spitz, noting that Perry’s last modestly-budgeted film, “Madea Goes to Jail,” grossed $90.5 million.

The horror entries may have a bit more trouble gaining traction. Warner’s “Whiteout” and Summit Entertainment’s “Sorority Row” will be entering a marketplace that already has Warner/New Line’s “The Final Destination” and Weinstein’s “Halloween II” both in their third week of release.

Made for $12.5 million and featuring Rumer Willis, “Sorority Row” is projected to take in around $8 million for its first weekend, while skewing slightly younger than “Whiteout,” which is more of a thriller-oriented title and stars Kate Beckinsale.

The market for scary R-rated movies is compact, Summit officials concede. However, having “The Final Destination” lead the box office the last two weekends has given both Warner and Summit a great chance to expose their target audience to their respective trailers.

Also in the mix, but not expected to be much competition: the Tim Burton-produced "9," which opened on Wednesday.

Directed by Shane Acker and featuring voice performances from Elijah Wood, Jennifer Connelly, Martin Landau and John C. Reilly, the animated fantasy took in $3.1 million at 1,653 locations on opening day, with distributor Focus Features unable to resist the allure of a 9-9-09 marketing hook — despite the fact that few movies open midweek during a non-holiday, non-summer week.

“The risk exposure was not worth not taking advantage of that opportunity,” said Focus distribution president Jack Foley, noting that he projects the animated film with Academy Award aspirations to take in somewhere around $12 million to $13 million over the weekend.