Pete Davidson may trash talk Staten Island on “Saturday Night Live” and in his stand-up act, but never let it be said that he’s not willing to also send some love to his hometown.

On Saturday night, the comedian bought out two screenings to his latest film, the DC movie “The Suicide Squad,” at Staten Island’s Atrium Stadium Cinema. To get the tickets, all fans had to do was line up ahead of the 7:20 p.m. and 8 p.m. screenings and tell the ticket booth that they are “friends of Pete” to get in free.

“It was all Pete’s idea, he reached out to us saying he wanted to give back to the community,” theater owner Gregg Scarola told SI Live. “This is a type of movie that has to been seen on the big screen. We have our best screens and auditoriums ready to go.” 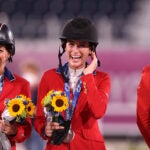 Davidson has made a career out of his love-hate relationship with Staten Island. On “SNL,” he’s joked about how he got backlash for saying in an interview that he wished that when Hurricane Sandy hit Staten it had “finished the job,” doubling down by quipping that “Staten Island isn’t just heroin and racist cops…it also has meth and racist firefighters.”

But even as his fame has grown, Davidson has remained home with his family in Staten Island, recently starring in the semi-autobiographical film “King of Staten Island” that was shot on-location with Judd Apatow. Scarola said he was touched that Davidson decided to use his cameo in James Gunn’s bloody comic book movie to support local business.

“He grew up in this community and it means a lot for him to reach out to us — a local theater — not just a chain,” Scarola added. “Not enough has been said about what he does for the community, he’s a really cool guy.”

“The Suicide Squad” is in theaters and on HBO Max now.