Kids, listen up: Uncle Pete Davidson is going to teach you how to stay out of jail when caught with drugs. He’s got some experience.

The very first time Davidson smoked weed, he was 16, the now-“Saturday Night Live” comedian told “Tonight Show” host and fellow guest Miley Cyrus during a Thursday night round of “True Confessions.” Unfortunately for Davidson and his buddy Mike, that first time was not a charm: the teens got caught cutting class and smoking grass at a Staten Island, New York train station.

Fallon, a father himself, then appropriately buried his face in his hands.

“No, it’s important,” Davidson told Fallon. “For your kids as well.”

The long and the short of Davidson’s advice was to definitely not run. Instead, meagerly give yourself up — and maybe even praise the cops while you’re at it.

“You know, guys? You know? You did your job,” Davidson recalled saying to the his captors all those years ago. “I got busted with weed. I’m not gonna try to run from this. I skipped school. I was a bad boy today.”

It worked. Davidson said the cops let him go and took his buddy, who they tackled during his escape attempt, right to jail. 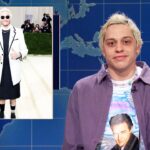 Davidson and Cyrus will light up Times Square — and probably some other stuff — in a few weeks as hosts of “Miley’s New Year’s Eve Party Hosted By Miley Cyrus and Pete Davidson.” Lorne Michaels and Cyrus are among the executive producers.