It’s a trick of the timing that Pete Docter is in position to become the first Pixar director to see his film win a best-picture Oscar nomination; the 41-year-old filmmaker, after all, just happens to be the guy who directed the latest in Pixar’s string of classics in the year when the Academy expanded the category from five to 10 nominees. But his film “Up,” the unexpectedly wrenching story of a cranky old man who flies his house to South America to fulfill a promise he made to his late wife, was picking up best-of-the-year buzz even before AMPAS decided to super-size the best-pic field.

Docter, who won a Student Academy Award in 1992 and has four Oscar nominations for his work on “WALL-E,” “Monsters, Inc.,” “Toy Story” and the short “Mike’s New Car,” has been part of the core at Pixar for almost 20 years. He is one of a small handful of directors – including company founder John Lasseter (“Toy Story,” “Cars”), Andrew Stanton (“Finding Nemo,” WALL-E”) and Brad Bird (“The Incredibles,” “Ratatouille”) – who have made the studio the dominant force in animation over the last two decades. 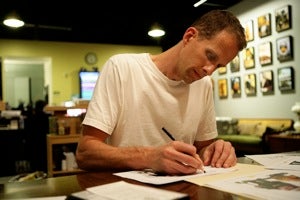 Are you a baseball fan?
No.

Oh. Well, I’ll tell you my theory anyway. With the World Series about to start, I’ve decided that Pixar is the New York Yankees of the Oscar season.
(laughs)

Historically, the Yankees have been so successful that it’s not enough for them to get into the playoffs – they have to win the World Series, or the season has been a failure. And for Pixar, you’ve set the bar so high that it’s not enough to just get an Oscar nomination for best animated feature – you have to win, and this year you have to get a best-picture nomination to boot. Do you feel extra pressure, representing that company?
Well, I mean, the main job in what we do has already been done, right? We made the movie, and we were happy with it before it even hit the streets. Which seems like an airy-fairy thing to say, but it’s true. We set out to make the best films we can, and so far, our instincts have been pretty good. Anything else that happens, knock on wood, is just gravy on top.

In 2002, when Randy Newman won an Oscar for the first film you directed, “Monsters, Inc.,” he made a comment about how Pixar had made four good movies in a row, and how rare that is.
Yeah.

Seven years later, you could argue that the streak is still intact.
The truth is that every one of our movies is lousy at some point. It’s just that we allow ourselves time to fix it. And we have this co-op of directors who are all doing their own thing, but who together at certain times to analyze and assist with everyone. On “Up,” for example, about every four months we would show the film to John Lasseter and Brad Bird and Andrew Stanton, and then we’d go upstairs and talk about what was wrong with it.

You want as many people as possible to not only boost you up, but also poke at the soft spots: “Hey, you’ve got some dry rot over here, let’s get the wood putty.” You end up with a big heaping pile of notes, some contradictory, and as the director I’m left to decide what points I agree with and which solutions seem good.

Were there specific things about “Up” that changed because of that process?
There were a lot of things. Like, we knew early on that even though she’s not on screen, Ellie is really a driving character in the film. She’s the thing that propels the whole story. And if you’re not on board with that, the film could meander and fall away. So we got a lot of notes about how to strengthen her presence in the film, sometimes through very simple things: music cues, the house, the badge … That was something we kept coming back to and reinforcing, so that her presence was felt through the second and third acts – particularly in the middle, because the second act is always the tough part.

The early Pixar movies were based on great, simple concepts: What if your toys came alive when you left the room? What if there really were monsters in your closet? But a film like “Up” isn’t so simple or high-concept. It’s more complex, more emotional, maybe more personal.
Yeah. It was not an easy sell. We joked at the time about going to Los Angeles, going into a studio and saying, “Listen, J.C., I got a great picture for ya! It’s about an old man, 78 years old, he floats his house to South America!” (laughs) There was no way that would ever happen. So we did a lot of work really selling the emotional backbone.

Speaking of emotion, the film opens with a montage, without dialogue, that’s pretty melancholy and very uncharacteristic for a movie with a big kids’ audience.
It was something we felt pretty strongly about. Early on, [screenwriter] Bob Peterson wrote a series of small scenes, and as we workshopped it and went to the storyboard, I remembered that my own parents, when I was growing up, took Super 8 films. And there’s something even more emotional about it when you don’t have sound, when all you have is flickering images on the screen. And so we took advantage of that sort of idea by stripping away dialogue and sound effects and letting it be music alone, and visuals.

Much of the comedy in the film comes from the dog whose electronic collar lets him “talk.” Did the concept for that character change much over the process?
No, not really. We sort of inherited him from another project that Bob and I had developed that didn’t go anywhere. We said, there’s something about that dog character, let’s try to get him in here.

A lot of the challenge was taking all these elements, and seaming them together so that it made sense. On the one hand, the goal always is to make the audience think, where is this going? The tricky part is, it can often seem like you have no compass for where this movie is going. So we tried to take elements that were very entertaining but unconnected, and pull them all together.

What did it take to do that?
It was a lot of weaving back and forth. You would have something at the end of the film that you’d want to buy into. So we would go back to the beginning and try to plant little hints, little pointers. Like the talking dogs. You introduce these dogs, and they talk because of their collars – which is hopefully very entertaining, but kind of bizarre. So what we did was we went back to the newsreel at the beginning, and made the dogs’ owner, Muntz, have these mechanical canine walkers, and a mechanical bath-giving machine, and all this stuff. You hint that he’s a wacky inventor and he loves his dogs. There was a lot of that kind of thing, going back and trying to set things up invisibly.

When you joined Pixar straight out of college, did it feel like a risk to go with such a small company?
Looking back, I kind of go, what was I thinking? Because there was no guarantee of anything, other than that I knew I loved the short films that they did. And I felt like, if that was an indicator of the taste and the type of work that I would get to do, that was what I wanted. I started in ’90, which was two years before we started working on “Toy Story.” So I got really lucky, coming in on the ground floor. John was very giving in including myself and Andrew in all parts of productions, even beyond our assigned tasks. I got to do design work and writing and animation and sound, and go to recording sessions and scoring sessions, and all sorts of stuff. That was a great way to get a handle on the whole process.

I hear that parts of Buzz Lightyear were based on you.
I was supervising animator on that show. Most of the animators have mirrors on their desks, so you end up doing faces as you’re developing the character. And as we developed that film, Andrew kind of put a lot of himself into Woody, and I was a little more Buzz. There’s just something about that character that resonated for me.

So what aspects of Buzz come from you?
Well, he’s a little more clueless. He’s a little bit off in his own world, and not always turned into the reality of what’s happening, that’s for sure.

(laughs) The thing that was a revelation for me on “Toy Story” was just how much work goes into something that eventually seems as though it sprang fully-formed from somebody’s brain. It’s a completely messy, hodgepodge, weird process – and in the end, if it’s done well, it feels as if it was meant to be exactly what it is.