Peter Farrelly is reuniting with Amblin Partners, which was behind his Oscar-winning “Green Book,” for his next feature, “Super In Love.”

The film is described only as a comedy feature, but it will have an original script by Flint Wainess, who has landed on the Black List with his script “Linda and Monica” and is a consulting producer on “In the Dark.”

Plot details for “Super In Love” are being kept under wraps.

Jeb Brody, Amblin’s president of production, and Mia Maniscalco, SVP Creative Affairs, will oversee the project for the studio. 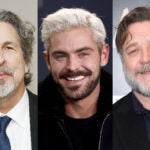 Peter Farrelly and Amblin last partnered on “Green Book,” which won three Oscars, including Best Picture, and earned over $320 million at the global box office. Farrelly himself won two Oscars for the film’s original screenplay and as a producer.

His return to comedy should be welcome news for people who are fans of his earlier movies with his brother Bobby Farrelly, including “There’s Something About Mary,” “Dumb and Dumber,” “Kingpin” and “Me, Myself and Irene.”

Farrelly is also currently at work on “The Greatest Beer Run Ever,” which is based on a true story about a man in 1967 who attempts to bring beer to his childhood buddies while they’re fighting overseas in Vietnam.