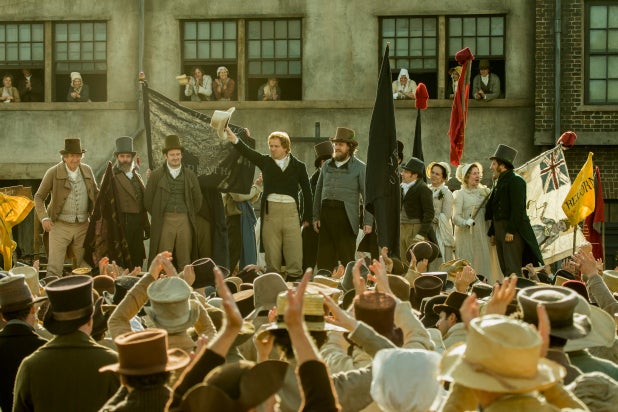 For much of its two-and-a-half-hour running time, Mike Leigh’s period epic “Peterloo” consists mostly of people talking — about what they need in order to be seen, to be heard, and frankly just to live. The last half hour depicts what happens when that kind of speech is cut off by the most disturbingly effective countermeasure: physical violence.

In 1819, a peaceful pro-democracy rally at St. Peter’s Field in poverty-stricken Manchester, England, became a massacre when charging infantrymen attacked the crowd with their swords. Whether you walk away from Leigh’s sacredly handled, no-nonsense slice of this history remembering the impassioned oratory of angry citizens or their murderous treatment by a cruel government is, on some level, Leigh’s own cinematic referendum on what we want from movies. Life as spoken up for, as passionately reasoned, or its opposite: death as grim spectacle?

Leigh makes talky films, after all, not action pictures. He prefers spouting radicals, well-meaning oddballs and eccentric idealists to cowardly brutes or the power-mad. So it’s not surprising that when it comes to memorializing onscreen the most notorious homegrown slaughter in British history, Leigh found a way with “Peterloo” to celebrate the righteous speech and spirited organizing that stirs him, while making perfectly clear what kind of response draws his everlasting ire.

Our entry point is the end of one war and the beginning of another struggle, as young, broken, battle-scarred soldier Joseph (David Moorst) returns from fighting at Waterloo to his home in the textile hub Manchester, where dad Joshua (Pearce Quigley) is a factory weaver and his mother Nellie (Maxine Peake, Hulu’s “The Bisexual”) sells pies. The welcome from his extended family is warm, but the ensuing years — Leigh’s time-leaping device is a poor woman’s softly sung lament — show a worsening of conditions: falling wages, restrictive tariffs preventing people from purchasing cheap imported goods, and growing poverty. (Sound familiar?)

While powerful, malicious local magistrates heartlessly punish the wretched for petty theft (again, what year is this?), the reform-minded gather in cramped parlors to argue for how to effect meaningful parliamentary change: most importantly, securing a vote for every working man in a country where less than 2%, mostly wealthy landowners, have that right. The suggested tactics range from careful petitioning of the monstrous Prince Regent (Tim McInnerny, “Game of Thrones”) to a last-resort kidnapping of the King. Simultaneously, spies at these confabs send word to irritable Home Secretary Lord Sidmouth (Karl Johnson, “Wittgenstein”) that the North — its strikers tolerated as mostly a nuisance — is now a hotbed of insurrection. (Visions of an English revolution to match France’s and America’s was enough to curdle the ruling class’s blood.)

After the men tasked with petitioning the government in London hear gentleman firebrand Henry Hunt (Rory Kinnear, “Brexit”) speak eloquently for reform, the decision is made to invite Hunt to do the same in Manchester at St. Peter’s Field and turn the occasion into a citywide show of support for change. Hunt agrees but insists that the most extreme among the citizenry leave their guns at home. The magistrates, on the other hand, fearing the spark of a larger unrest, turn to the Yeomanry for armed assistance.

“Peterloo” hardly has a central character, but it has a kind of common human protagonist: the panoply of voices from its vivid cast. Though “Peterloo” brims with 19th century authenticity, from its hardscrabble interiors and stately halls of power to the quiet beauty of its rural scenes, it’s no costumes-and-decor drama — Leigh’s focus is on the rhythms of talk in all the ways it influences: as rant, argument, posturing, strained politeness, open skepticism, and full-on performance. Kinnear’s turn as the peacock-ish, pragmatic Hunt perhaps comes closest to standing out as a compact portrait of a real figure from that time. Equally gifted with words, progressive about politics, and hopelessly condescending, Hunt is a fascinating example of what’s great and grating about the wealthy speaking for the everyman.

In the build-up to the rally, Leigh finds many lovely touches that convey the camaraderie, worry, and joy that anticipated it, and that coalesced into a hopefulness that morning as crowds gathered. Which means when the violence hits, Leigh films it for the strange shock that it is, how it literally drowns out voices, transforming convivial purpose into screaming, and togetherness into chaos. The massacre is haphazard, direct, and confounding; thankfully, Leigh, cinematographer Dick Pope (the director’s frequent collaborator) and editor Jon Gregory (“Three Billboards Outside Ebbing, Missouri”) don’t juice it for effect. It’s the most rationally dramatized of irrational events, and it made me think of the choked, alien terror of what being in the middle of a mass shooting must feel like. It seems impossible to comprehend as it unfolds.

“Peterloo” ends pretty soon afterward, save a last check-in with McInnerny’s smugly grotesque Prince, and a small, hushed funeral. Leigh grasps that no heartwrecked or inflamed monologue from any of the reformers we’ve gotten to know can process something so appalling. It’s been hard enough as it is for Britain itself to figure out how to acknowledge this low point in its history. Which makes Leigh’s brutally quick exit from his ardent ode to rhetoric sadly appropriate — this odd, earnest, wonderful movie’s own nod to the tragedy of speechlessness.