With a terrier’s blocky face, a somewhat portly figure and klutzy landing technique, the flying dragon Elliot is unlike almost any other creature on screen. This update of Disney’s animated 1977 character is less like a dopey uncle and more like the ultimate fantasy canine, a tail-chasing companion who can also scare off packs of wolves and hunters. His emerald-green fur is as inviting as a soft carpet of moss, when he’s not camouflaged in the forest, or totally invisible.

Elliot is a triumph, a new ideal for fantasy creatures.

Creating a wonderful screen creature, a thing with personality, power, even a little menace, isn’t easy. Giving it a fully realized home is far more difficult. The filmmaker behind the sober crime drama “Ain’t Them Bodies Saints” may have seemed an odd choice to revamp an awkward and goofy Disney film, but David Lowery‘s ease with actors and command of tone make “Pete’s Dragon” one of the best remakes in recent years.

Knowledge of the original is entirely optional, but to anyone familiar with the 1977 film, this story outline will be familiar: Orphan Pete (Oakes Fegley, “This Is Where I Leave You”) roams a forest with his dragon friend Elliot before being carried back into society by Grace (Bryce Dallas Howard), whose slightly crotchety father (Robert Redford) claims to have seen a dragon in his youth. 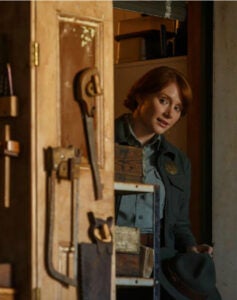 In this case, however, Grace, is a park ranger with a lifetime of forest experience and a practical demeanor. Buttoned-up but not dour, she dresses like a person who has dealt with a few wood ticks and isn’t eager to repeat the experience. She looks real; the movie feels real around her. (It’s almost certainly a mistake to assume any aspect of Howard’s performance as Grace is explicitly conceived as a response to “Jurassic World,” but the mental comparison is difficult to shake.)

The simple story, pulling Pete between his forest home with Elliot and a more conventional surrogate human family, is tuned as family-friendly material, but Lowery and co-writer Toby Halbrooks avoid saccharine morass. Redford is smartly used as a sort of ideological compass; he and Howard have a good rapport. So, too, do Fegley and Laurence, who appear to instantly fall into the playful, half-unspoken language of children.

Fegley’s work deserves specific praise. The young actor is often acting opposite Elliot, who in addition to being non-existent in a practical sense, is also primarily non-verbal. Fegley is convincingly at home. The ensemble gels well as a whole, calmly building the film’s low-key reality. The tone of family and YA films often feels amped-up or enhanced, but “Pete’s Dragon” goes its own way, calm and assured.

That confidence is built in part as the film pirouettes through tonal shifts like the orphan boy leaping from tree to tree. In one sequence, Lowery and editor Lisa Zeno Churgin (“House of Sand and Fog”) step delicately from an emotional low point to physical comedy (a broad sight gag featuring a cow) then land on a bookending emotional downturn. It doesn’t hurt that Elliot is a seemingly bottomless well from which to draw pure emotion, but the use of that energy never comes off as crass.

This movie is often very funny, with Lowery & Co. pulling laughs out of simple actions from Elliot, or organic-seeming moments as the dragon blunders across civilization. Of course, “simple actions” is a gross oversimplification; the exceptional animation by WETA Digital compresses thousands of hours of work into a natural-seeming creature.

It’s easy to be resentful when harsh reality intrudes upon the feather-light sense of magic conjured by Pete and Elliot’s forest rambles. But this story has a modern setting, and the film doesn’t shrink away from dealing with the elevated response a dragon would likely engender, even in a small Pacific Northwest town. “Pete’s Dragon” can’t avoid engaging the collision of dragon and human fear but seems to do so in such an overly careful manner that it stumbles a bit as the action hits a climax.

That, and a too-neat coda — which, in keeping with modern studio story architecture, cracks open a door for a sequel — threaten but never quite break the film’s magic spell.

This “Pete’s Dragon” is not a musical, but well-chosen songs from the likes of Will Oldham and the Lumineers softly emphasize the film’s quiet, small-town sensibility. In one scene, Peggy Lee’s “It’s a Good Day” plays like a minor reference to the original film’s “Brazzle Dazzle Day,” but Lowery doesn’t belabor the point.

Elliot and the warm cast are the most obviously appealing aspects of “Pete’s Dragon,” but the entire production, from cinematographer Bojan Bazelli’s (“The Lone Ranger”) patient touch with light and shadow to the reality-defining costumes by Amanda Neale (“What We Do in the Shadows”) and an evocative score from Daniel Hart (“Ain’t Them Bodies Saints”), contributes to the film’s spell. This is a major studio effects picture with the heart of a much smaller movie, a thing as rare as a legendary forest creature.