Petra Mayer, a books editor for NPR who covered Comic-Con and other events, died Saturday. She was 46 years old.

Mayer’s employer announced her death Saturday, noting in the obituary that she died in Maryland of what is believed to have been a pulmonary embolism.

“Petra was NPR through and through. To say that Petra will be missed simply seems inadequate,” Nancy Barnes, senior vice president for news, wrote in an email to staff that was excerpted by NPR. 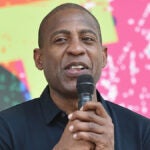 Mayer reviewed books — from sci-fi novels to comics, as well as fantasy, romance and more — for the outlet, but also reported live from Comic-Con and contributed annually to NPR’s Book Concierge, a literacy recommendation event.

Mayer began working for NPR as a college student in 1994 and left the organization briefly in 1997 before returning for good in 2000. Before heading to the NPR Books team, she worked on “All Things Considered” and “Morning Edition.”

Her colleague Rose Friedman told their employer, “She is like the keeper of a certain wonderfulness of NPR. She is the spirit of the place.”