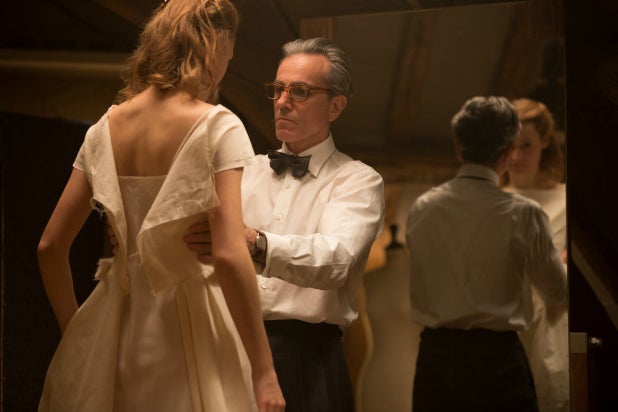 After mining the American soul (“Boogie Nights,” “There Will Be Blood,” “The Master”) as brilliantly as any working director has in the last 50 years, Paul Thomas Anderson moves to 1950’s England for “Phantom Thread,” his mesmerizing follow-up to the loosey-goosey “Inherent Vice.”

An elegantly stitched romance of vector-crossing emotional neediness, it’s set in an evocative ecosphere of haute couture fashion. But by the time it reaches its appetizingly perverse end, the film primarily reaffirms Anderson’s own skill at hand-crafting exquisitely conflicting interior and external worlds.

Advance word zeroed in on the movie’s status as three-time Academy Award-winner Daniel Day-Lewis’s swan song from acting. (One of those wins was for Anderson’s “Blood.”) And without a doubt, his portrait of moody, demanding dressmaker Reynolds Woodcock is as richly drawn as you’d expect, if not the kind of turn likely to win him a fourth Oscar.

He’s equally matched here by Luxembourgian actress Vicky Krieps (“A Most Wanted Man”) as Woodcock’s chosen muse Alma, and the ever-magnetic Lesley Manville (“Another Year”) as his quietly imperious sister and business partner Cyril. They are as formidable a trio of intersecting personalities as you’ll find in any movie of recent vintage.

A white-gloved beehive staffed during the day by seamstresses, cutters and fitters, all dedicated to outfitting society’s grandest females, London’s House of Woodcock is also a multi-tiered manifestation of its star creator’s temperament. Reynolds lives to see his wealthy clients look beautiful in immaculately customized lace, satin, and velvet.

But they’re not the only women who come and go in that gorgeous townhome: casually dismissing his latest model-turned-lover who became little more than a nuisance during his quiet-time-mandated breakfast, Reynolds’s sister/enforcer Cyril cruelly notes that she was also gaining weight “waiting for you to fall in love with her again.” Needle mishaps aren’t the only pinpricks to be felt in this intensely orderly, relationship-unfriendly place.

On a weekend outing to his country home to decompress, Reynolds falls for a gangly, sweet-faced, Eastern European-accented waitress named Alma, who knows how to flirt back. As first dates go, it’s geared toward his tastes: a fancy dinner out, getting-to-know-you talk, then — what else? — a private fitting for a Woodcock original, with a brief appearance by Cyril to record measurements. Like our reaction, Alma’s face betrays how odd and cool and funny it all is, but Reynolds knows the power of his attention; dressing, rather than undressing, is how he woos.

Immediately, as if Reynolds were replacing batteries, Alma becomes part of the humming Woodcock operation as model, white-smocked worker, resident, and main squeeze, with a front row view to his perfectionist highs and distancing lows. She watches as he charms a Belgian princess (Lujza Richter) in preparation for creating her bridal gown. She also gets protectively angry for him when, at the wedding of an obnoxious socialite client (Harriet Sansom Harris, “Love Is Strange”) whom Reynolds despises but tolerates, the rich lady passes out in one of his creations.

But is it true love? Or a hierarchy-affected companionship that’s ultimately doomed? Reynolds knows Alma is not like the others but bristles when she attempts to assert herself. And Alma is smartly attuned to Reynolds’s hidden vulnerabilities, like the phrases or names he sews into the linings of outfits that only he knows about. As Anderson’s delicately witty and suspenseful screenplay reveals, Reynolds and Alma are both prisoners — him to an ego-driven routine of work and release, she to a relationship with little agency for her own way to love (and with Cyril as warden) — and it’s when their relationship is brought to the brink that their out-of-synch obsession for each other takes the most breathtaking of twists.

To give that away would be like a cook revealing a secret ingredient, so I’ll only say: You haven’t seen desire, manipulation, and theatrical acquiescence in a Gothic romance play out quite like this, and with such strange, off-handedly humorous tension. As memorable as Day-Lewis usually is with intelligent, scary men of appetites, he’s also got a charismatic, boyishly funny side, and Anderson utilizes it well in keeping him from being just a self-consuming handful. As for Krieps, whose features would have disarmed Vermeer, she handles the audience-surrogate elements and the more deliciously mysterious parts of her nature with the same crafty finesse.

Steeped as it is in the vagaries of love and creation (since every filmmaker ultimately makes a movie about being a director, this could easily qualify as Anderson’s), “Phantom Thread” is only tangentially about fashion per se. But when Anderson’s camera isn’t trained on its wonderful leads, it captures a vivid, textured picture of couture house swirl — drawing, draping, sewing, eyeing — without over-glamorizing the milieu. (There’s no credited cinematographer, with Anderson, in interviews, calling the 35mm look a team effort.) Needless to say, costumer Mark Bridges’ era-specific tailored suits, gowns, and work clothes are a handsomely photographed detail, as are the cozy interiors of Woodcock’s wood-side house and the posh, lofty gleam of his London digs.

Dancing across the surface of the movie is Anderson regular Jonny Greenwood’s enchanting music score, too, which boasts one of the more sublime and transporting piano themes in recent memory. It instantly puts you in the mood for a story of active hearts, emotional tyranny, and consuming passions, and even preps you for the movie’s ticklish aberrance. At heart, “Phantom Thread” is a classy, curious fractured fairy tale and, on the runway of Anderson’s career, a beautiful head-turner.