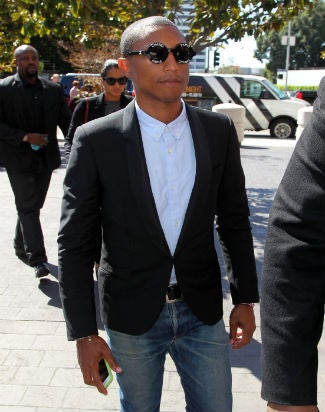 Pharrell Williams took the stand for the sixth day of the “Blurred Lines” trial in a downtown Los Angeles courtroom Wednesday and made it clear he had other things he would rather be doing.

“This is the last place I want to be,” the chart-topping musician told the court.

Williams also adamantly denied copying Marvin Gaye’s “Got to Give It Up” and said that any similarity between the songs was because of “feel. Not infringement.”

Robin Thicke, who provided his own testimony last week, told TheWrap outside the courtroom, “I’m here to support Pharrell.” Also in attendance for the copyright dispute between the family of the deceased R&B singer and the songwriters were Nona, Frankie and Jan Gaye, who contend that the 2013 song and Gaye’s 1977 hit are so similar that the family is owed a hefty percentage of the song’s earnings.

Meanwhile inside court, Williams kept his cool and answered each question with “no, sir” or “yes, sir.” When asked about his financial success, he said that everyone has to go to sleep at night and wake up in the morning, adding that he feels “blessed” by his success.

“I wouldn’t trade music for anything. This is what keeps me going,” he said.

As for the reason why he was there, Williams testified that he wrote “Blurred Lines” alone in an hour. He said he started by finding a groove and music for the song, using the Logic program on his Apple computer, and that by the time Thicke came to the studio — the song was done. Williams said he had previously worked with Thicke for two days and that “Blurred Lines” was written and recorded on their last day of working together. “It was a cool night,” he said. “We were hopping and dancing to it.”

Williams was adamant that he did not intend to copy the Marvin Gaye song. When attorney Howard King asked if he could have copied it sub-consciously, he replied: “No, sir” saying that if he had noticed any similarity then he’d have contacted musicologists for an analysis. “I’d deal with it properly. It’s the fair, right and just thing to do.”

While he loves and respects Gaye, he said any similarity between the two songs was unintentional. “The last thing you want to do is to take something from someone else when you love him,” he said.

Williams also stressed that when he hears music that is already in existence, he does not want to emulate it. “If anything, it helps us to stay away from it. As a creator, you get a kick out of bringing something new into the ether. That’s what all artists strive for.”

Gaye family attorney Richard Busch repeatedly played snippets from “Blurred Lines” and “Got To Give It Up” to examine if the bass lines, melodies and keyboards of both songs sound the same, but Williams did not think they were comparable, “Ours was on a loop.”

As Busch continued to draw comparisons between the songs, Williams continued to shoot them down, saying “there’s a lot of chattering in that song,” adding that phrases like “shake it,” “turn around,” and “come on” were typical of black families in the ’70s when a song was played. Williams said that it was only upon reflection that he realized he “must have been channeling that late ’70s feeling.”

Sound engineer Andrew Coleman also testified that he was in the studio when the song was written and never heard any discussion of Gaye or “Got To Give It Up.”

Closing arguments in the trial begin Thursday at 11:30 a.m. and jury instructions will be issued.