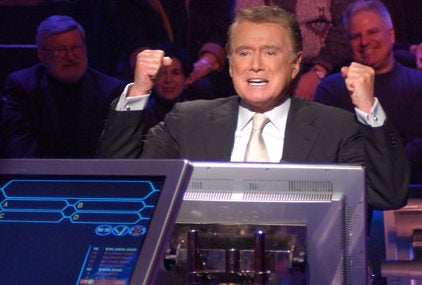 Regis Philbin is the celebrity guest host on the daytime version of "Who Wants to Be a Millionaire" next week.

From Nov. 30-Dec. 4, in shows taped before Philbin’s scheduled hip surgery, he will sit in for the game show’s regular host, Meredith Vieira.

Michael Gelman, executive producer of "Live! With Regis and Kelly," will be the expert for the “Ask the Expert” lifeline during Philbin’s episodes. Gelman appeared via Skype from his "Live" office, offering contestants help in his areas of strength: history, pop culture, science, geography and food. He cited his weaknesses as literature and sports.

It’s Philbin’s first stint as a guest host on the weekday version of the show, although he was the original host of "Millionaire" when it debuted in the U.S. on ABC in primetime in 1999. In August, Philbin returned to host a special 11-episode run celebrating the franchise’s 10-year anniversary in the U.S.

The weekday version, which debuted in 2002 with Vieira as host, is is in its eighth season.