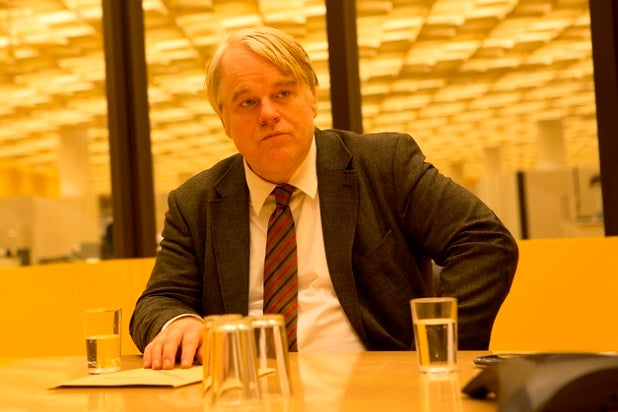 The spy thriller “A Most Wanted Man,” which features the late Philip Seymour Hoffman in one of his final film roles, begins its box-office rollout Friday — and maybe its Oscar campaign, too.

“This is a tremendous performance that is going to be a big part of his legacy. If we feel serious momentum for Philip, we’ll be more than happy to follow through,” said Howard Cohen, co-president of Roadside Attractions, which is distributing the adaptation of John le Carre’s 2008 novel. Cohen was just back in L.A. from Tuesday night’s New York premiere of “A Most Wanted Man,” which will debut in 360 theaters in the top 75 markets on Friday.

The cerebral espionage tale, directed by Anton Corbijn, has drawn strong reviews so far and with a 90 percent positive rating on Rotten Tomatoes. Hoffman plays the head of a covert German spy unit in “Most Wanted,” which follows a Chechen-Russian immigrant (Grigoriy Dobrygin) who arrives in Hamburg to claim his late father’s suspiciously acquired fortune, putting both German and U.S. security agencies on alert. Rachel McAdams, Willem Dafoe, Robin Wright and Nina Hoss co-star.

Hoffman’s performance has drawn the sort of critical notices that can trigger awards consideration.

“A secret shadow warrior, chain-smoking and overly fond of drink, Hoffman’s Gunter Bachmann takes all the clichés about the aging spy and makes them new again,” wrote reviewer Kirk Honeycutt on his website. As a Best Actor Oscar winner for his portrayal of Truman Capote in 2005’s “Capote,” Hoffman is likely to be in the conversation for this year’s award, particularly if the film can get some box-office traction. Cohen is confident that will happen.

“We could’ve gone out in the fall, the more traditional period for awards films, but we thought we’d sacrifice too much business,” he said. “This is a smart movie that we think is going to resonate with the mainstream, and that’s why we aren’t initially targeting just art house audiences.”

Cohen said strategy on “A Most Wanted Man” is similar to that the company employed with the Matthew McConaughey drama “Mud,” which broke out in 2013 to become Roadside Attractions’ top-grossing film ever with $21.5 million. The plan is to double the screen count to roughly 600 locations for its second week, said Cohen, who also studied the rollout of “Tinker, Tailor, Soldier, Spy.” That film, another adaptation of a Le Carre spy thriller, brought in $24 million for Focus Features in 2011 and earned a Best Actor nomination for Gary Oldman.

Of course, not having the film’s biggest star around to promote the film won’t help “A Most Wanted Man.” Cohen said the Gotham premiere was a thrill, “but also a little sad, without Philip there.” Hoffman was found dead of a drug overdose in a Manhattan hotel at the age of 46 in February.

“He was an incredible actor and man,” said Cohen, who said the reaction to the film and Hoffman’s work has been gratifying. He cited a poignant essay written by the 83-year-old Le Carre and published in the New York Times on Sunday about the author’s encounters with Hoffman while the movie was filming.

“He didn’t have to do that but it was great that he did, and it has set a tone for the launch,” Cohen said.

Also read: John le Carre on Philip Seymour Hoffman: ‘He Was Burning Himself Out Before Your Eyes’

“A Most Wanted Man” is a counter-programming play to this weekend’s wide openers “Hercules” and “Lucy,” and the summer’s other superhero and sequel fare. Cohen doesn’t think that the ongoing box-office slump  — this season is off nearly 20 percent from 2013 — will help or hurt.

“The bad part is that that there is a perception out there that the movies are crappy, which is fed by the media, and that’s bad for moviegoing in general,” he said. “On the other hand, if you can come along with something that’s smart and well done, people will say, ‘there’s a real movie out there.'”