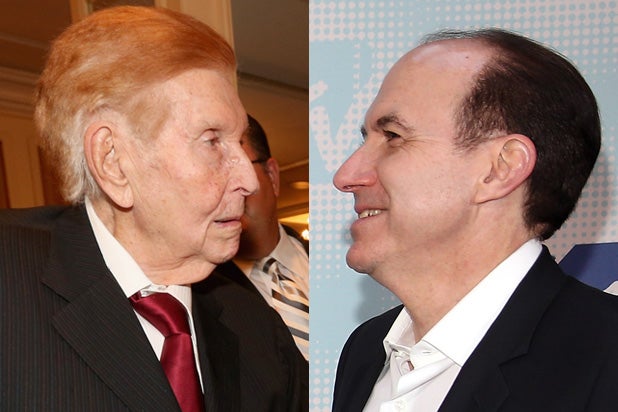 Philippe Dauman was ousted as CEO of Viacom on Thursday night during a meeting of the media giant’s board that ended a multi-pronged legal battle with the company’s founder, Sumner Redstone, and his daughter Shari Redstone, a person with knowledge of the situation told TheWrap.

Viacom’s board has approved an agreement that would remove Dauman after 10 years as the top executive at the company and install COO Thomas Dooley as interim chief executive, effective immediately. A formal announcement is expected soon.

Dauman, who is set to receive a golden parachute package worth $72 million, will remain non-executive chairman through September 13. Dooley will hold the interim top executive title through Sept. 30, buying the board time to assess and evaluate for the future.

Meanwhile, the board will expand with the five new members that Viacom parent company National Amusements Inc. had previously selected, growing to 16 — at least until Dauman departs next month. The newbies will be Kenneth Lerer, Thomas May, Judith McHale, Ronald Nelson and Nicole Seligman.

Some time later, three more board members will cycle out to bring the total to an even dozen, which will probably take place at the next annual meeting, likely in March 2017. Redstone had previously attempted to remove four current board members — George Abrams, Frederic Salerno, Blythe McGarvie and William Schwartz — so may be the most vulnerable in any turnover.

The deal would also settle three discrete lawsuits in Massachusetts, Delaware and California filed by Dauman and Abrams, challenging the 93-year-old mogul’s mental capacity to make decisions about his businesses.

This settlement should also squash a proposed sale of a 49 percent stake in Paramount Pictures, which Dauman and board members had championed but the Redstone family vehemently opposed.

Redstone oversees the privately held National Amusements Inc., which controls an 80 percent stake in both Viacom and CBS. He also served as a mentor to Dauman for much of their shared careers. Not anymore.

Recently, that relationship has been much different. The Redstone/National Amusements camp has argued that Dauman has done a bad job running the publicly traded corporation, whose stock price has basically halved since its height two years in the midst of troubled performance by cable networks like MTV and Nickelodeon as well as the Paramount movie studio.

Also Read: Here's Where 14 Moguls Kicked Back This Summer, From Jay-Z to Harvey Weinstein (Photos)

In after-hours trading, Viacom stock was up about 1 percent, to $43.27. Shares had previously slipped about two percent during the regular U.S. trading day.

Meanwhile, the Dauman’s camp has countered that Sumner’s daughter Shari — with whom he reconciled last year after a period of estrangement — is actually pulling the puppet strings in an epic and bitter power play.

Well, the Redstones won, unless you consider Dauman’s $72 million to not work anymore the bigger victory here.