“Picard” is returning for its third and final season next year.

On Thursday, Paramount+ announced the show will premiere Thursday, Feb. 16, 2023, as part of Star Trek day.

They also released a new teaser for the show, offering fans a look at the new ship — the U.S.S. Titan. You can watch that clip at the top of this post. 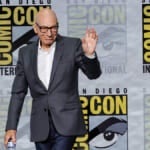 Also Read:
‘Picard': The Boys and Borg Are Back in Town in New Character Posters for Final Season (Photos)

The series is produced by CBS Studios in association with Secret Hideout and Roddenberry Entertainment.