Piers Morgan was criticized on Twitter for a Daily Mail column where he called 23-year-old tennis star Naomi Osaka an “arrogant spoiled brat” for not doing press conferences at tournaments to protect her mental health. His column came three months after his comments on the mental health of another woman of color — Meghan Markle — led him to quit his “Good Morning Britain” job.

“Narcissistic Naomi’s cynical exploitation of mental health to silence the media is right from the Meghan and Harry playbook of wanting their press cake and eating it,” the headline from Morgan’s Monday column read. He also posted a tweet mirroring his headline with a link to it on Monday.

The backlash was immediate and continued into Tuesday, when readers were still posting messages like, “Good morning to Naomi Osaka and Meghan Markle only I hope Piers Morgan has a sh– one.”

By tying Markle to Osaka, it was clear Morgan was not yet ready to stand down on his criticism of the former royal. He famously walked off his job on “Good Morning Britain” in March when a colleague publicly pushed back on his constant Markle denunciation, which came after she revealed she’d been suicidal during her time in the royal family. 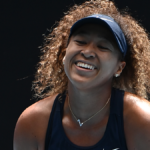 He continued to tweet through Monday and Tuesday, responding to his detractors. He accused a Black political analyst of playing “the race card” and wrote, “Are high-profile women of colour exempt from criticism regardless of their conduct? Sorry, I must have missed that woke memo!” He even tweeted a photo of himself with Serena Williams to show he has no “problem with female Black tennis stars.”

As for Osaka, she announced Monday she was withdrawing from the French Open, less than a week after she made waves by saying she would not speak to press during the tournament for the sake of her mental health.

The tennis pro announced her withdrawal in a lengthy note posted to Twitter, in which she reiterated her struggles with anxiety but admitted her message “could have been clearer.”

“Hey everyone, this isn’t a situation I ever imagined or intended when I posted a few days ago,” Osaka’s message began. “I think now the best thing for the tournament, the other players and my well-being is that I withdraw so that everyone can get back to focusing on the tennis going on in Paris. I never wanted to be a distraction and I accept that my timing was not ideal and my message could have been clearer.”