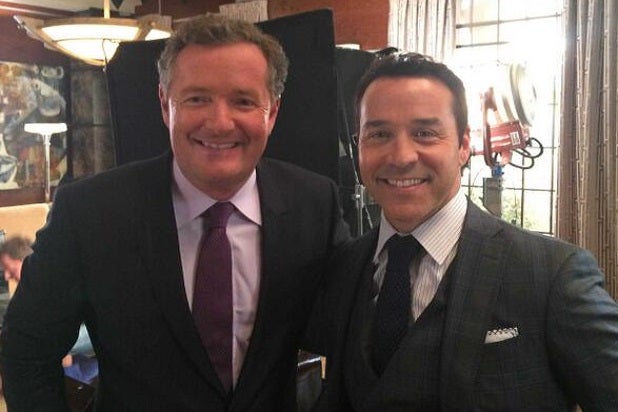 Piers Morgan might not be with CNN for much longer, but he might just have a second career on the big screen.

Morgan, whose CNN series ends this month, has booked a role on the upcoming “Entourage” movie, the cable news personality revealed via Twitter on Thursday.

Also read: Ted Nugent Takes Credit For Piers Morgan’s Cancelation: I Got His ‘A– Thrown Out’ (Video)

“To those wondering about my next career move.. here’s what I’m doing next two days,” Morgan wrote on his Twitter account.

A subsequent post included a photo of a cast list, which revealed that Morgan will play a character named … wait for it … Piers Morgan.

Also read: Nancy Grace Rips Piers Morgan: It’s Not Right for a Brit To Lecture Us About Gun Control!

Morgan later posted a photo of himself with “Entourage” star Jeremy Piven and creator Doug Ellin, and later a photo with Piven.

“It’s a wrap – one of the best days of my working life,” Morgan wrote.

But while Morgan might have spent the day reveling in the experience of hobnobbing with big-shot actors, Morgan devoted at least part of Wednesday reflecting, perhaps a touch bitterly, on the imminent demise of his CNN show.