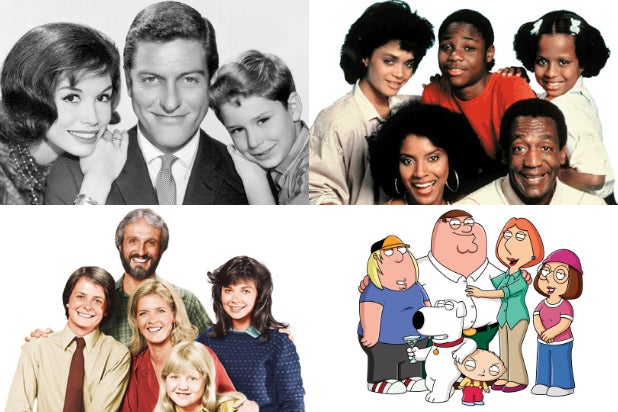 It’s early in the 2014 pilot season, but a new sitcom trend has already started to emerge among broadcast networks, and it’s almost as old as television comedy itself: the nuclear family series.

Eight pilots ordered by broadcast networks center around a patriarch and his loving brood (see below). If that sounds familiar, it’s because the formula has been used – to great success – time and again since the 1960s.

But for the past several years, broadcast networks have taken risks with sitcoms about alternative and nontraditional family structures. And by and large, those projects failed.

NBC’s “The New Normal,” which ran for one season in 2012, was a show about a gay couple using a surrogate to have a baby and start a family.

Network executives said at the time of the show’s cancelation that American viewers had no problem with the gay characters – citing the extraordinary success of “Will & Grace” as an example – but that the premise still pushed the envelope further than what audiences may have wanted to see.

“It may have been slightly ahead of its time, because that really was the focus of it: The gay marriage and the baby,” NBC Entertainment Chairman Bob Greenblatt said at the Television Critics Association summer press tour in July.

“Sean Saves the World,” which NBC brass had hoped would carry the mantle for gay families in a more accessible manner, didn’t make it past one season either; NBC shut down production on the freshman Sean Hayes sitcom after 14 of the 18 ordered episodes had been shot, and when the remaining episodes will air has yet to be announced.

But, NBC executives said, the changing sentiment in the United States towards marriage equality and LGBT rights means these shows will continue to get ordered and try to get a foothold on the network. NBC is trying again this year with Liz Feldman’s “One Big Happy,” about gay and straight best friends who decide to have a baby together. Executive produced by powerhouse Ellen DeGeneres, this pilot may stand a better chance than most.

The pendulum swing back toward the classic mom, dad, and 2.5 kids portrayed in sitcoms may instead be reflective of demographic changes in the American populace. Though it’s back on the rise in recent years, the U.S. divorce rate hit a 40-year low in 2009, and 60 percent of women with a bachelor’s degree are married.

See photos: Bill Cosby’s Getting Another Sitcom: 10 Other TV Dads Who Adopted a New Family (Photos)

Whether these pilots have the right mix to make it to upfronts in May remains to be seen. But if history teaches us anything, the formula that’s worked decade after decade may just work again.

BAMBI COTTAGES (ABC Studios, Sony Pictures Television)
Writer: Brian Gallivan
Producers: Brian Gallivan, Will Gluck, Richie Schwartz
Director: Phil Trail
Logline: Project follows a dad who dreams of a life as a vacation. He uproots his family to New Hampshire where he opens a group of tourist cottages, which never feels like a vacation to the family.
Format: Single camera
Cast: TBA

FRESH OFF THE BOAT (20th Century Fox Television, Popular Misconception)
Writer: Nahnatchka Kahn
Producers: Peter Huyck, Alex Gregory, Jack Whitehall, Ben Cavey
Director: TBA
Logline: It’s the 90s, and hip-hop loving Eddie is growing up in suburban Orlando, raised by an immigrant father who is obsessed with all things American and an immigrant mother who is often bewildered by white culture. With his father owning and operating an All-American Steakhouse chain, this loving family of FOB (“fresh off the boat”) Taiwanese Americans try to live the American dream while still maintaining their cultural identity and sense of family. Based on chef Eddie Huang’s memoir, “Fresh Off the Boat.”
Format: Single camera
Cast:
Mr. Huang — Randall Park
Mrs. Huang — Constance Wu