Pink Floyd released its first single in 28 years on Thursday, “Hey Hey Rise Up,” with all proceeds going to Ukrainian humanitarian relief.

The vocals are by Andriy Khlyvnyuk of Ukrainian band Boombox, whose viral March 30 Instagram video featured him singing a Ukrainian protest song from World War I in Kyiv’s Sofiyskaya Square. The single takes its title from the last line of “The Red Viburnum In the Meadow,” which translates as “Hey, hey, rise up and rejoice.”

“It’s a really difficult and frustrating thing to see this extraordinarily crazy, unjust attack by a major power on an independent, peaceful, democratic nation. The frustration of seeing that and thinking ‘What the f— can I do?’ is sort of unbearable,” Pink Floyd’s David Gilmour told The Guardian in an interview published Thursday.

Gilmour played with Boombox in a 2015 London show in support of the Belarus Free Theatre, where the Ukrainian singer’s visa problems kept him from attending. “We played ‘Wish You Were Here,’ for Andriy that night,” Gilmour wrote. “Then I saw this incredible video on Instagram, where he stands in a square in Kyiv with this beautiful gold-domed church and sings in the silence of a city with no traffic or background noise because of the war. It was a powerful moment that made me want to put it to music.”

The Boombox frontman gave Gilmour his blessing for the song over the phone from his hospital bed where he was recovering from a mortar shrapnel injury. Gilmour hopes to play the song with Khlyvnyuk in person someday.

Gilmour told The Guardian, “My grandchildren are half-Ukrainian, my daughter-in-law Janina is Ukrainian — her grandmother was in Kharkiv until three weeks ago. She’s very old, disabled, in a wheelchair and has a carer, and Janina and her family managed to get her all the way across Ukraine to the Polish border and now they’ve managed to get her to Sweden, literally last week.” 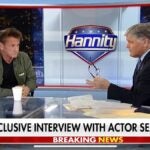 The single’s cover is a painting of a sunflower by Cuban artist Yosan Leon. It references the Ukrainian woman who was seen in a video giving sunflower seeds to Russian soldiers and telling them to carry them in their pockets so that when they die, sunflowers will grow. They band also shot a video for the song, in which Nick Mason’s drums are decorated with a painting by Ukrainian artist Maria Primachenko.

Roger Waters, who has long been at odds with his former bandmates, did not participate. In the interview with The Guardian, Gilmour downplayed Waters’ remarks a week before the Ukraine invasion, in which he called the notion of an invasion nonsense. “Let’s just say I was disappointed and let’s move on,” Gilmour said. “Read into that what you will.”