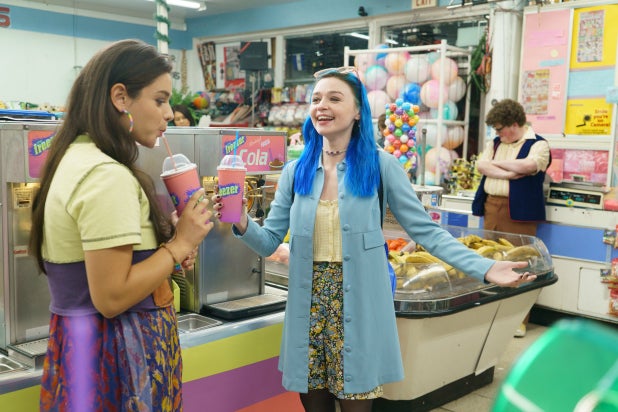 Many corners of popular culture, from talk show “Desus & Mero” to sitcom revival “One Day at a Time” to sweatshirts on Instagram, have been putting forward a very positive message about mental health, championing therapy while also destigmatizing anxiety. That spirit of supportiveness suffuses “Pink Skies Ahead,” a coming-of-age tale of a young writer who learns to let go of her anxiety over having anxiety. (The film has been acquired by MTV Studios for worldwide release following its premiere at AFI 2020.)

It’s not necessarily breaking new ground, nor does it stretch the boundaries of the genre in the way films like “Diary of a Teenage Girl” or “Ghost World” have. But the heartfelt, autobiographical elements in writer-director Kelly Oxford’s storytelling, coupled with an appealing and empathetic performance by Jessica Barden (“The End of the F***ing World”), provide a real understanding of mental health that so often escapes films and TV shows that get it wrong.

Author-turned-filmmaker Oxford adapts her essay “No Real Danger,” and even though she has moved the setting from Calgary to Southern California, she digs deeply into her personal experience. It’s the early 1990s, and Winona (Barden) has dropped out of college and moved back in with her parents. Her dad Robert (Michael McKean) pays her to drive him to work (even though she can’t seem to pass the driver’s license test) and to do odd jobs around his office, but this is clearly a stopgap measure.

When Winona feels a lump in her armpit, she goes to see her physician, Dr. Cotton (Henry Winkler) — or, rather, her pediatrician, whom she insists on seeing over his objections, given that she’s now 20. He tells her she’s physically fine, but after years of watching Winona psychosomatically self-diagnose herself with terrible ailments, he gives her a referral to a psychiatrist, Dr. Monroe (Mary J. Blige). Winona insists, “I can’t have anxiety; I’ve never had a panic attack,” which is pretty much a Chekhov’s gun for a comedy-drama about a woman on the verge of a nervous breakdown.

Winona is smart and a fast-talker. She feeds herself a stream of rationalizations about why she left school, why she’s not writing, why she doesn’t get along with her mother (Marcia Gay Harden as Pamela), why it’s unfair that her parents are planning to sell the house and move into an apartment without her, and why the DMV is so clearly rigged against her. It’s easy to slip into her point of view before being reminded that, no, this young person is losing control and could benefit from professional help.

What makes “Pink Skies Ahead” such a pleasurable watch is Barden’s mastery of tone and Oxford’s clear-eyed portrayal of the circumstances. We’ve seen films like this before, where the central character is a misunderstood paragon surrounded by idiots or is clearly self-destructive and beyond the help of people around them who care, but this is a movie without villains, where everyone is trying to make the best of a difficult situation. If Winona’s parents aren’t always ready with the tough-love, Oxford is compassionate enough to understand their reasons, and McKean and Harden give the characters enough dimension so they’re not just clueless bystanders to their daughter’s pain.

Barden’s performance is a memorable one, but the film remains an ensemble piece all the way, with Winkler, in particular, taking what could have been a rote authority-figure role and goosing it with dry wit. (And yes, we do get a scene featuring both Winkler and McKean, a bonus for GenXers who grew up watching “Happy Days” and “Laverne & Shirley” back-to-back on Tuesday nights.)

As Winona’s cadre of friends, Rosa Salazar (“Alita: Battle Angel”) and Odeya Rush (“Lady Bird”) make the most of their handful of moments, and Melora Walters, of course, walks away with her scene as the skeptical mother of the nice guy Winona briefly dates.

As the title suggests, cinematographer Charlie Sarroff (“Relic”) goes for the bright-sun-filtered-through-haze look that gives “Pink Skies Ahead” a look that’s indelibly Southern California, even without aiming his camera at the obvious landmarks. Ariel Loh (“The Eyes of My Mother”) and Adrian Galvin’s score follows the script’s lead in gently pivoting between playful lightness and more brooding intensity.

This is a film with an agenda in mind, granted, but it’s too witty and too heartfelt to be dismissed as a mere public service announcement. Audiences may get a message out of this message movie, but they’ll also get a movie.