In the first look photo at Robert Zemeckis’ “Pinocchio,” Tom Hanks, dressed as Geppetto, admires at his puppet boy wonder and re-imagines a scene that closely resembles the 1940 animated classic.

The live-action film combines Zemeckis’ CG visual effects in order to bring Pinocchio to life on Geppetto’s quest to help him become a real boy.

The live-action “Pinocchio” will open on Disney+ in September. See the first look image above. 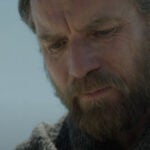 “Pinocchio,” the 1940-movie, was a two-time Oscar winner for the classic song “When You Wish Upon A Star” and for its original score. The film, based on the classic short story of a living boy puppet’s journey to become a real boy and learn from his conscience Jiminy Cricket, was a box office hit at the time and a landmark for Disney animation following “Snow White and the Seven Dwarfs.”

Disney’s “Pinocchio” is not the only “Pinocchio” adaptation being released this year, as Guillermo Del Toro has his own animated darker take on the story that will hit Netflix later this year.