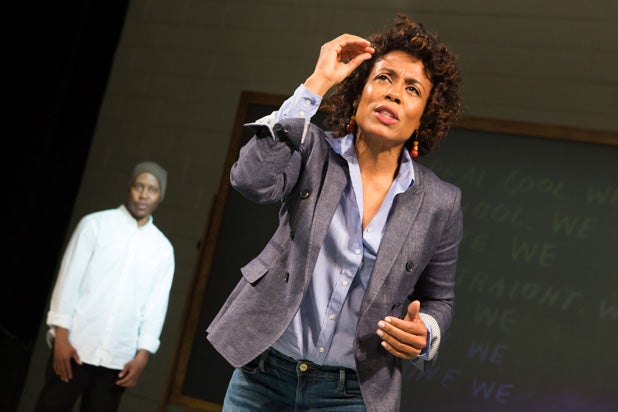 Ninety minutes is just not enough time and space for all the pain, trauma, and injustice that Dominique Morisseau loads into her new play, “Pipeline,” which opened Monday at Lincoln Center Theater’s Mitzi E. Newhouse Theater.

Playing a very put-upon mother-teacher, Karen Pittman introduces us to Nya as a woman on the verge of a nervous breakdown. She has a fraught job as a teacher in a big-city public school as well as a very troubled teenage son, Omari (Namir Smallwood), who’s just been expelled from an upstate private school where he struck a teacher and may face charges of assault.

It’s immediately clear why Nya wants to keep her son out of the school where she works and send him to a good (primarily white) private school. At Nya’s school, another veteran teacher, Laurie (the always volatile Tasha Lawrence), sports a bandage above her right eye, and she didn’t get it playing volleyball with the students. Laurie has just returned to the school after a medical leave due to some classroom brawl. Despite the bruises (and perhaps a concussion), she is much more adept than Nya at channeling her anger outward while remaining a dedicated teacher.

In the play’s most harrowing scene — and there are a few — Laurie returns to do battle in the classroom, and this time gets into a verbal fight with one of the school’s security guards (Jaime Lincoln Smith) over the ridiculousness of “protocol” when one student is bashing another student’s skull into the classroom floor. Morisseau makes the best case ever that these professionals, the teachers as well as the guards, are ridiculously underpaid.

Laurie has a marginally easier time of it as a teacher because she doesn’t have a black son who just got expelled from an upstate private school for having “attacked” (or maybe it’s just “slammed”) a teacher against the wall in a classroom altercation over a heated discussion of Richard Wright’s “Native Son.”

As with Wright’s character, Bigger Thomas, Omari’s violence has a systematic inevitability. Only his girlfriend at the school, Jasmine (Heather Velazquez), another student of color, understands him.

The scenes with Jasmine are the weakest in “Pipeline.” Morisseau has the two teenage characters say things that sound like something an adult wishes she had said in her youth, with the experience and knowledge gained only later.

Smallwood keeps his character’s precociousness in check, giving hints of even greater despair just under the surface. Velazquez, on the other hand, does everything but finger snap the air as she pontificates. With such fine-tuned awareness at their disposal, it’s difficult to see why these two characters haven’t been able to better play the system that’s stacked up against them.

In the end, Nya has none of the answers. In the classroom, she gives a brilliant analysis of how the mainstream press and the black press handle Gwendolyn Brooks’ poem “We Real Cool” with tellingly different type treatments of the text. Nya knows how to teach, and Pittman makes the monologue to the audience a riveting, extended set piece even on the mundane subject of type treatments.

What one might wish is that this insensitivity of the white press to Brooks’ seminal 1959 poem would be reflected in the “Native Son” discussion that turns so callously against Omari. Instead, the teacher in question is just being a jerk in his badgering questions to Omari. Not that jerk teachers don’t exist.

Morisseau is wise not to limit Omari’s crisis to school problems. His father, Xavier, prides himself on never missing a check for child support or his son’s education, but it soon becomes evident that Xavier has had little to do with Omari precisely because of his son’s crisis. (He’s played by the remarkable actor Morocco Omari, who exudes social and professional confidence from the moment he steps on stage.) Somehow someway Xavier avoided, or denies, ever having experienced the rage of his son. Xavier, although a supporting character, is a perfect meeting of actor, writer and director.

Lileana Blain-Cruz’s direction puts the drama of “Pipeline” on a grand stage. The performing space, even in the small Mitzi E. Newhouse, is enormous, and the upstage tiled wall suggests every high school you’ve ever dreaded entering. At times, Blain-Cruz floods Matt Saunders’ white sterile set with projections (by Hannah Wasileski) from other school corridors that turn Omari’s crisis into an all too universal story.