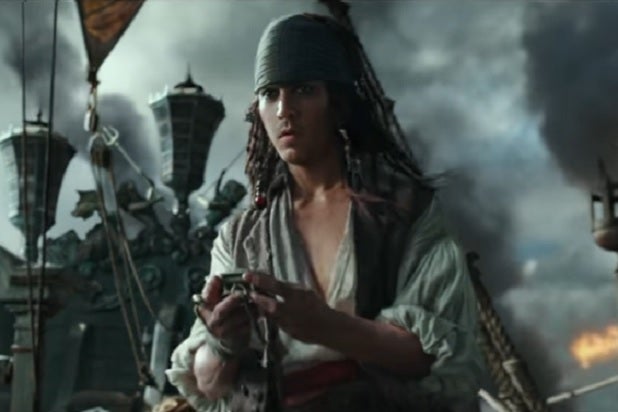 Disney has brought back Johnny Depp for a fifth round as Captain Jack Sparrow, and most critics are once again tying the latest “Pirates of the Caribbean” sequel to the mast for a stiff lashing.

With early reviews now in, “Pirates of the Caribbean: Dead Men Tell No Tales” currently has a Rotten Tomatoes score of 33 percent, just one point ahead of the 32 percent posted by its 2011 predecessor, “On Stranger’s Tides.” Most critics have panned the film for offering nothing new or compelling for the franchise, saying Depp’s once Oscar-worthy performance as Captain Jack is now feeling stale.

There were a few critics who had some good things to say. TheWrap’s own Robert Abele praised the franchise’s new directors, Joachim Rønning and Espen Sandberg, for bringing back some of what made “The Curse of the Black Pearl” such a fun adventure 16 years ago.

“The appeal of any ‘Pirates’ movie is in the aggregate gleam of its many working parts, and this time around, thanks to the energetic direction of Rønning and Sandberg, the shine feels freshly buffed,” Abele wrote.  “The elaborate location trappings (ships at sea, island shores, bustling cities) veer between baroquely beautiful and picturesquely lush thanks to Paul Cameron’s colorful cinematography, and unlike the relentlessly dreary night in ‘On Stranger Tides,’ it’s all mostly daytime-set this time around.”

But many other critics disagreed with Abele. See what they had to say — along with more from those who sort of liked it:

Also Read: 'Pirates of the Caribbean: Dead Men Tell No Tales' Review: Johnny Depp Serves Up a Fifth of Frivolity

“The ‘Pirates Of The Caribbean’ series is a washed-up acrobat, a bloated whirling dervish awkwardly going through the motions, barely sticking the landing with a half-hearted, “ta da.” Nearly all movie franchises tend to regurgitate the same story, but the best of them manage to keep things relatively fresh. But by now, nothing inventive ever occurs in Disney’s ‘Pirates’ series that feels remotely inspired. Jack Sparrow is spent and needs to be retired, but the gods of movie McFranchises demand he keep up his buffoonish antics.”

“The Pirates series hasn’t delivered a memorable set piece since ‘Dead Man’s Chest”s oversized waterwheel, and time and again this plumps for distraction over consequence, flooding the screen with images that attain scale – like the ship that rears up on its haunches in readiness for attack – but not much meaning. The much-trailed zombie shark sequence comes to feel like watching somebody playing a tie-in video game.”

“Keeping up with the nonsensical plot lurches and inconsistencies is exhausting. And even the once-reliable Johnny can’t distract us like he used to. Jack’s shtick has consumed the character. Where once he was an engaging oddity whose unhinged mannerisms you felt cloaked hidden (and sober) depths, Jack now feels like a routine rather than a person. Where his soul once dwelled, we find only backstory — executed with some horribly uncanny valley de-aging CGI work on Depp’s face, and one supremely pointless revelation. Ever wonder why he’s called ‘Sparrow’? Us neither.”

“The movie is overly busy and almost desperately frantic (although thankfully not as headache-inducing as, say, the ‘Transformers’ torture-fests), full of twists and turns that ultimately mean almost nothing and pretty much lead right back to where we started. The long-running joke of the series is that pirate Jack Sparrow, its flamboyantly dissolute anti-hero, never learns and never changes; perhaps after five films a change might do him — and us — some good.”

“New directors Joachim Ronning and Espen Sandberg bring a fresh perspective to the table, with a clear focus on stripping back and having some fun with the characters. The action sequences, of which there are plenty, are well staged and thrilling as seen in an opening that has Sparrow sliding through a town on the roof of a bank, and the CGI effects are, in parts, spectacular. It’s a real relief to see the directors reel things in and break free of the cluttered, anything goes approach employed by Rob Marshall in ‘On Stranger’s Tides’.”