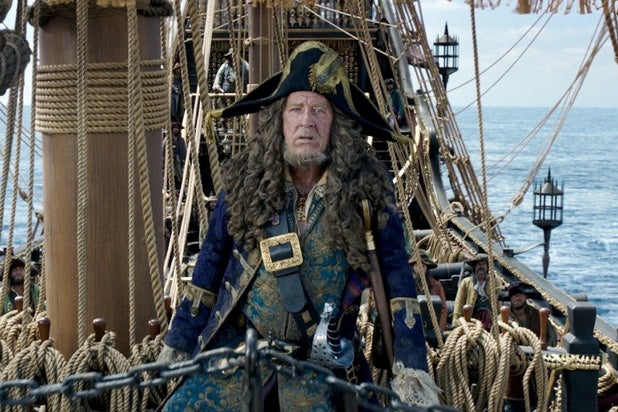 “Pirates of the Caribbean: Dead Men Tell No Tales” is on pace for a $77 million Memorial Day weekend total, with a $62 million estimated three-day total from 4,276 locations.

That would continue the slide for the “Pirates” franchise at the domestic box office, with the 3-day total dropping 31 percent from the $90 million opening for the last “Pirates” film, “On Stranger Tides.” It’s also drifting closer to the $46 million three-day opening made by the franchise’s first film, “The Curse of the Black Pearl,” back in 2003. With an A- on CinemaScore, the film has pleased those who did see the movie, but franchise fatigue and poor critic reception — 32 percent on Rotten Tomatoes — has put some holes in this boat.

But when overseas numbers are factored in, Disney will make back its $230 million budget easily, as it is expected to gross over $300 million worldwide by the end of Monday. In China, it is on target for a $67 million opening weekend, the third highest for any Disney film behind only “Captain America: Civil War” and “Avengers: Age of Ultron.”

With an estimated three-day overseas total of $208 million, “Dead Men Tell No Tales” is about to push the “Pirates” franchise past an all-time gross total of $4 billion. Even with dropping domestic numbers, don’t be surprised if Captain Jack Sparrow returns to the seas in the future.

Paramount/Skydance’s “Baywatch,” meanwhile, is struggling to get any traction and has remained at a four-day estimate of $22 million from 3,647 locations and a five-day total of $26 million. It remains in third place for the weekend behind “Guardians of the Galaxy Vol. 2,” which is estimated to make $24.2 million.