On Monday’s “The Late Show,” Stephen Colbert kicked things off with a seasonal cold open inspired by one of the dumber, and yet somehow very disturbing intersections of Christmas and law enforcement. And the result was Santa Claus shooting himself in the, uh, sleigh bells.

So, last Friday the El Paso County, Colorado Sheriff’s department did a weirdo gun culture flex when it bragged on Twitter that in 2021 it issued “49,750 Concealed Handgun Permits with another 2,560 awaiting to be issued.” The flex? The tweet began with “Guess who came in to receive his Concealed Handgun Permit today?” followed by a Santa emoji. And attached was an image of someone who looks like Santa sitting in the Sheriff’s office getting his permit.

No, really, law enforcement officials bragged that they issued a concealed carry permit to someone who has openly announced plans to spend Christmas even breaking and entering thousands of strangers’ homes via their chimney. (Just kidding.) 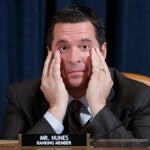 Of course, you can imagine this wasn’t met with the kind of virality the Santa Fe sheriff’s office hoped for. Instead, the department’s tweet was ratio’d to hell and back, widely mocked/criticized for — well, honestly we don’t have to explain why, right?

Within three hours, the sheriff’s office issued a sheepish non-apology: “EPSO intended to highlight our staff in the Concealed Handgun Permit Office, not to be insensitive. Santa correlates to the month of December and we thought he would help to recognize our hard working staff.” OK.

Anyway, back to Colbert. Per usual, the cold open gag was preceded by news clips explaining the situation. Then came the gag, a cartoon parody of the Christmas song “Up on the Housetop,” but with the lyrics changed to reflect the absurd idea of a gun-toting St. Nick bringing his concealed weapon along on his annual ride.

The clip ends with Santa jumping down the chimney only to, apparently, cause his gun to go off. “Right in the jingleberries!” Santa screams. Whoops. Watch the clip below: