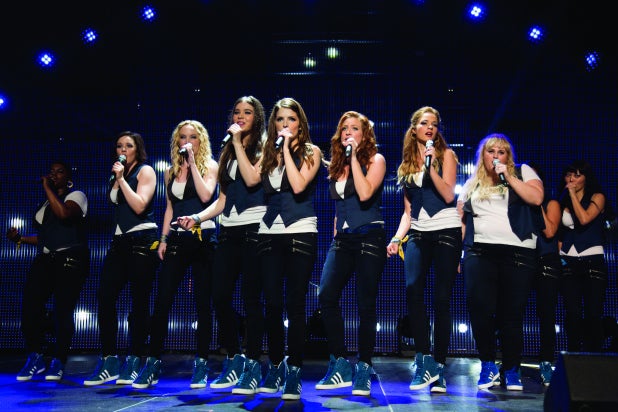 In the world of sequels, there are those rare exceptions where the second movie improves on the first, and there are those all too common continuations that waste your time and threaten to make you forget why you ever liked their predecessors.

Somewhere in the middle, you get second chapters that pretty much tell you the same jokes again, but with enough new spins and angles and reversals that you wind up entertained and amused, even though you miss that sense of discovery and novelty. For better or for worse, that’s the spot where “Pitch Perfect 2” lands.

Did you like it in the original “Pitch Perfect” when collegiate a cappella girl group the Barden Bellas embarrassed themselves onstage and then had to repair their damaged reputation through friendship and bold song choices? Or when commentators John (John Michael Higgins) and Gail (Elizabeth Banks, also directing this time) said outrageous and inappropriate things? Or the outsized confidence of Fat Amy (Rebel Wilson) or the weird, whispered non sequiturs of Lily (Hana Mae Lee) or the Type-A freakouts of Chloe (Brittany Snow) or the interchangability and lack of screen time of Jessica (Kelley Jakle) and Ashley (Shelley Regner)?

Lucky you. “Pitch Perfect 2” serves it all up again, with just enough flashes of absurdist wit, musical brio and new characters to keep this serviceably fun follow-up from going down like a plate of lukewarm leftovers.

We open with the Bellas enjoying their reputation as three-time national champs until an unfortunate mishap at Kennedy Center involving live television, the President of the United States, and a Fat Amy wardrobe malfunction. Stripped of their title and forced to hand their national tour over to their German nemeses, Das Sound Machine, the only chance that the Bellas have to stay in the game is to travel to Copenhagen and win the world championship.

Plot-wise, that’s pretty much it, except for Beca (Anna Kendrick) tuning out of the Bellas’ problems by interning at a record label whose owner, played by Keegan-Michael Key, takes time out from producing a Snoop Dogg Christmas album to tell Becca to knock it off with the mash-ups already and start creating something original. Lucky for Becca, new Bella legacy Emily (Hailee Steinfeld) writes her own music, despite the fact that anything that isn’t a cover is anathema to the a cappella world.

Even though that numeral in the title threatens to weigh down “Pitch Perfect 2,” director Banks and returning screenwriter Kay Cannon find something unexpected and funny for each scene, whether it’s an overwrought duet for Fat Amy and her love interest Bumper (Adam Devine), an unexpected cameo by professional athletes, or the rigorous precision of Das Sound Machine, whose stern leaders Komissar (Birgitte Hjort Sørenson) and Pieter (Flula Borg) leave Beca so sexually flummoxed that she can’t even trash-talk them.

The one element of “Pitch Perfect” that this new film can’t provide is surprise; if you’re willing to forfeit discovery in favor of some breezy déjà vu, however, “Pitch Perfect 2” is totally playing your song.