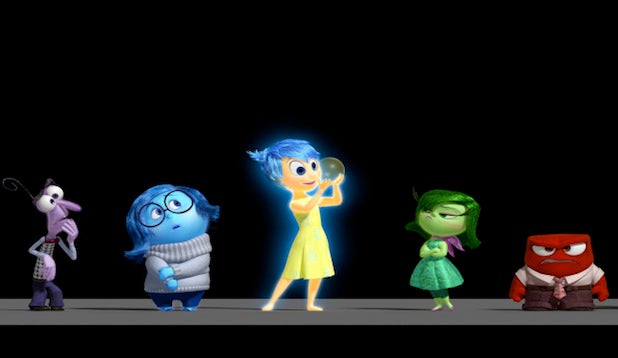 The brain behind “Inside Out” gave the world its first extended look at a feature film all about the human mind.

Pete Docter presented concept art, some working footage, and a deeper plot synopsis at a panel at the Annecy International Animated Film Festival on Tuesday. The Oscar-winning director of “Up” explained that the film follows the life of a young girl as she learns to experience feelings and deal with the real world; sort of like in “Up,” the beginning of the film shows her early years, with color-coded and anthropomorphized emotions popping up based on corresponding events.

At PixarTimes.com, a reader sent in a description of the early montage that was shown to audiences at the festival:

Joy is her first emotion. Joy seems happy on her own, but then sadness appears. When Riley is being fed broccoli, Disgust appears. When her father threatens no dessert without eating her broccoli, Anger makes an appearance. Fear is introduced when  she looks at a cable on the floor cautiously and then steps over. We also see the emotions watching her first important memory appear. Memories can be called up for Riley to recall on a sort of projection in Headquarters.

Docter told the crowd that the little girl was in part based on his own daughter, Ellie, who he noticed changing as she reached her pre-teen years. But, as PixarPost.com noted, the little girl really is just the conduit for the story, which mostly takes place in his her mind (not her brain, exactly; this is more metaphysical) and features stars like Amy Poehler, Bill Hader, and Mindy Kaling as the voices of her emotions.

The story really picks up when Riley and her parents move from a small town to San Francisco, and on the first day of her new school, Joy and Sadness tussle and fall out into the far reaches of her mind — which really isn’t all that unusual for a 12-year-old, anyway.

For animation fans, the news that famed “Looney Toons” cartoonists Chuck Jones and Tex Avery are inspirations for the art is quite exciting, as well.