The Producers Guild of America is giving the 2010 David O. Selznick Achievement Award in Motion Pictures to Pixar’s John Lasseter, making him the first producer of animated films to receive the guild’s top honor.

Lasseter is currently chief creative officer at Walt Disney and Pixar Animation Studios and the principal creative adviser at Walt Disney Imagineering. He’s best known for his work at Pixar, where he directed “Toy Story,” “A Bug’s Life,” “Toy Story 2” and “Cars,” and executive produced many more of the company’s classic films.

The award will no doubt give Pixar’s latest film, “Up,” a little more visibility in the awards race … not that the acclaimed Pete Docter film needs much help. 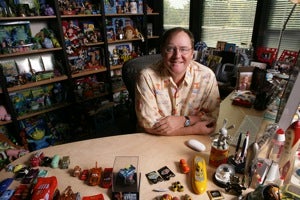 The film is a lock for a nomination in Oscar’s animated feature category and a likely nominee in the expanded best picture category. After this announcement, it’s hard to imagine "Up" won’t also be nominated for the top film award by the PGA, which recently expanded its own best-pic category to 10 nominees.

The full text of the press release:

LOS ANGELES (October 21, 2009) – The Producers Guild of America (PGA), a national non-profit trade group committed to protecting the rights and credits of producers in film, television and new media, announced today that John Lasseter, Chief Creative Officer, Walt Disney and Pixar Animation Studios and Principal Creative Advisor, Walt Disney Imagineering will receive the 2010 David O. Selznick Achievement Award in Motion Pictures. The award will be presented to Lasseter at the 21st Annual PGA Awards ceremony on Sunday, January 24, 2010 at the Hollywood Palladium. Lasseter is the first producer of animated films to be awarded the Selznick Award by the PGA and was the co-recipient of the PGA’s first-ever Vanguard Award in 2002.

The PGA’s Selznick Award is given in recognition of an outstanding body of work in motion pictures. The honor has a rich and distinguished history, with past recipients including such legendary producers as Stanley Kramer, Saul Zaentz, Clint Eastwood, Billy Wilder, Robert Evans, Brian Grazer, Jerry Bruckheimer, Roger Corman, Laura Ziskin and last year, the team of Kathleen Kennedy and Frank Marshall.

“John Lasseter is a uniquely talented producer with the rare combination of technical ingenuity and creative vision. He’s a wonderful storyteller, consistently displaying extraordinary skill, humanity and grace,” said David Friendly and Laurence Mark, co-chairs of the PGA Awards. “John”s work with both Pixar and Disney has raised the bar for producers in live-action films as well as in animation, and we’re excited to be honoring him with the Selznick Award this year.”

Lasseter added, “David O. Selznick was one of Hollywood ’s legendary producers and master showmen, and it’s a privilege to be in the company of so many other fantastic filmmakers who have received this award. Animation is a collaborative process, and I am grateful to the incredible artists, storytellers, and technical and production wizards who have made the success of Walt Disney and Pixar Animation Studios possible. I am thankful to the Producers Guild for this wonderful honor.”

Lasseter is a two-time Academy Award®-winning director and oversees all films and associated projects from Walt Disney and Pixar Animation Studios. He directed the groundbreaking and award-winning films Toy Story, A Bug’s Life, Toy Story 2 and Cars. Additionally, his executive producing credits include Monsters, Inc., Finding Nemo, The Incredibles, Ratatouille, WALL.E, Bolt, and this year’s critically acclaimed Up, which enjoyed the distinct honor of opening the 2009 Cannes Film Festival. Next up for Lasseter is Disney’s highly anticipated return to hand drawn animation with The Princess and the Frog, a musical comedy set in the great city of New Orleans .

In 2004, Lasseter was honored by the Art Directors Guild with its prestigious “Outstanding Contribution To Cinematic Imagery” award, and received an honorary degree from the American Film Institute. Lasseter received the 2008 Winsor McCay Award from ASIFA-Hollywood for career achievement and contribution to the art of animation. Most recently, Lasseter and his fellow directors at Pixar were honored at the 66th Venice International Film Festival with the Golden Lion for Lifetime Achievement award.

Prior to the formation of Pixar in 1986, Lasseter was a member of the Computer Division of Lucasfilm Ltd., where he designed and animated the computer-generated Stained Glass Knight character in the 1985 Steven Spielberg-produced film Young Sherlock Holmes.

Lasseter attended the inaugural year of the Character Animation program at California Institute of the Arts and received his B.F.A. in film there in 1979. While attending California Institute of the Arts, Lasseter produced two animated films, both winners of the Student Academy Award® for Animation; Lady and the Lamp in 1979 and Nitemare in 1980. His very first award came at the age of 5 when he won $15 from the Model Grocery Market in Whittier, California, for a crayon drawing of the Headless Horseman.

About the Producers Guild of America
The Producers Guild of America is the non-profit trade group that represents, protects and promotes the interests of all members of the producing team in film, television and new media. The PGA has over 4,000 members who work together to protect and improve their careers, the industry and community by providing members health benefits, enforcing workplace labor laws, the creation of fair and impartial standards for the awarding of producing credits, as well as other education and advocacy efforts. The PGA hosts important industry events including the annual PGA Awards and the Produced By Conference. Visit www.producersguild.org for more information.