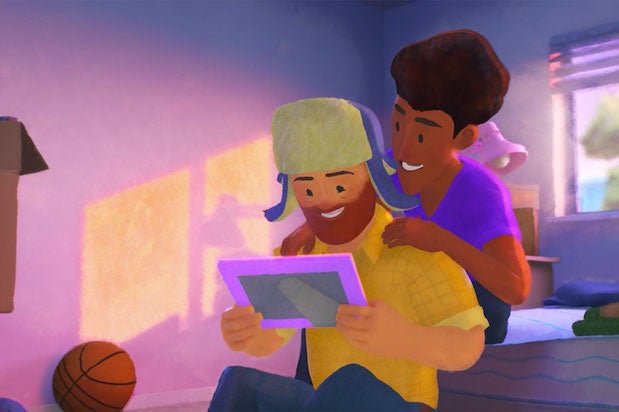 Pixar’s latest short film “Out,” which released on Disney Plus on Friday, features the studio’s first gay main character.

Just in time for Pride, the short film written and directed by Steven Clay Hunter follows a man who is about to move to the city with his boyfriend but is hesitant to come out to his parents that he’s gay. But in a magical twist brought about by a dog and a cat that soar out of a rainbow, the man briefly swaps bodies with his dog, and he rushes to hide evidence of his relationship before his parents discover his sexuality. He quickly learns, though, that his true self isn’t something that needs to be hidden.

The 10-minute short film is part of a series of “SparkShorts” that have released on Disney Plus in the last few months, including the Oscar-nominated short “Kitbull.” Hunter is an animator for Pixar who most recently worked on “Toy Story 4” and “The Good Dinosaur,” and “Out” is his directorial debut.

Gay characters have never been the focal point of a Pixar feature or short in the past, but LGBTQ characters have not been entirely absent from the studio’s collection. Viewers noticed two women pushing a stroller in “Finding Dory” And in Pixar’s latest feature film “Onward,” which hit theaters in March before being pushed early to Disney Plus, Lena Waithe voiced purple cyclops cop who talked about her lesbian relationship.

In “Onward,” Waithe, who is openly gay, delivers the line of Officer Spector, “It’s not easy being a new parent — my girlfriend’s daughter got me pulling my hair out, OK?” That line was enough to get “Onward” censored when it was released in Russia, where the character’s line was altered in the Russian dub.

Though viewers spotted a gay pair of antelopes in “Zootopia” or, more recently, a brief lesbian kiss at the end of the latest “Star Wars” film, GLAAD has said that Disney lags behind its competitors in terms of LGBTQ representation and gave the studio a “failing” grade in a 2018 report, with none of the studio’s films from that year passing its criteria as inclusive of LGBTQ characters.

You can watch “Out” on Disney Plus now.