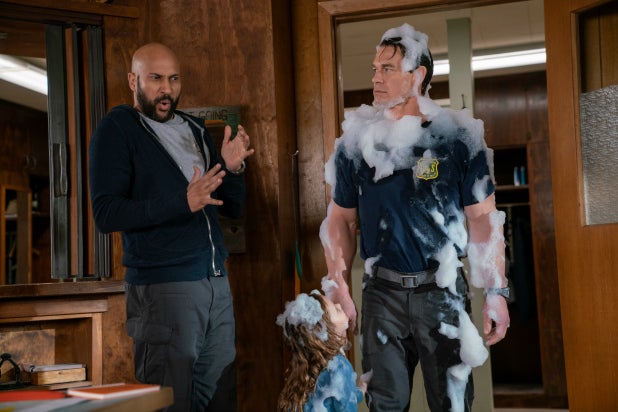 When I think about some of the family films that peppered my childhood, there are many that still make the cut for decent, fun entertainment. Unfortunately for my daughter and nephews, “Playing with Fire” won’t be one of those fond movie memories they will want to share with their own kids someday.

The film is bland and predictable, underestimates kids’ abilities to understand story and humor, and relies way too much on sight gags that are clichéd and overdone.

Fire Station Superintendent Jake Carson (John Cena), “Supe” to his crew, loves his job. As a smoke jumper, he leads Mark (Keegan Michael-Key), Rodrigo (John Leguizamo) and Axe (Tyler Mane, Rob Zombie’s “Halloween II”) as they parachute into wildfires, saving lives and homes throughout a more woodsy area of California. When Supe airlifts Brynn (Brianna Hildebrand, “Deadpool 2”), Will (Christian Convery, “Beautiful Boy”) and Zoey (Finley Rose Slater) from a blazing cabin fire, the incoming weather and inability to hand them off to a guardian makes them his crew’s charges for the weekend.

To make matters more complicated, Jake is finally getting his shot at his dream promotion, and the division commander (Dennis Haysbert) is going to drop by as soon as the weekend is over. Or so Supe thinks.

The kids are wild, uncontrollable and running amuck in a child-hazard haven that passes as a woodland firehouse, because, of course. Just as the crew begins to connect with the kids, Supe finds the real reason they were found alone, just in time for the Commander to show up to a messy firehouse, and Child Protective Services comes to take the trio of youngsters away. The kids take off, and Supe has to decide between his dream job or chasing the kids.

Director Andy Fickman (“Paul Blart: Mall Cop”) has done plenty of kids’ TV, so I have to question a lot of the choices made here. The Disney Channel’s “Liv and Maddie” was actually funny and a favorite of my daughter’s; none of that sense of awareness of what kids like or find amusing is anywhere to be found in “Playing with Fire.”

The gags are predictable, and even the inevitable poop humor misses. Kids love poop humor, but in my kid-packed screening, there was radio silence for most of the film. The laughs finally came at the blooper reel at the beginning of the credits. In a way, seeing those bloopers made the movie look even worse, as they display lots more fun and humor than ever appears otherwise.

Just listening to the dialogue that these extremely talented comedic actors (Leguizamo! Key! JUDY GREER!!) give every ounce of effort toward breathing life into made me wince. It made me wonder if this was just a throw-away project for writers Dan Ewen and Matt Lieberman (“The Addams Family”) to kill time between projects. This was Ewen’s first feature writing job, but definitely not Lieberman’s, and one has to wonder: Do they even know kids? The entire film talks down to children, so that even a gag that might usually work winds up feeling so forced and basic that the joke dies before it even begins. Worse yet, they commit the sin of forgetting that parents have to watch this too. It leaves nothing for the grown-ups to relate to, connect to, laugh at, or even enjoy.

Another issue is, at least for those of us living in California during a season of deadly wildfires, that it makes firefighters and smoke-jumpers into jokes. Leguizamo’s Rodrigo is supposed to be a helicopter pilot, and yet, for most of the film, he is afraid to fly the chopper. Supe is a legacy smoke-jumper, and it’s as if he was dropped from an Army infantry into the fire station. They are caricatures, and yes, “Playing with Fire” is allegedly a comedy, so they are supposed to be funny. But there is a way to do so without making firefighters — or this entire film, for that matter — feel completely incompetent and lifeless.