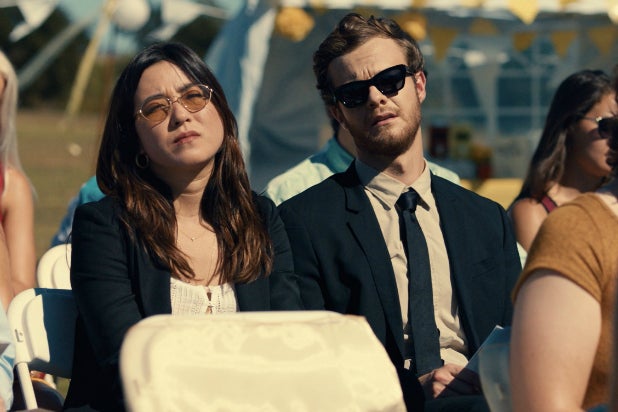 Even indie romantic comedies seem to be getting into the more-is-bigger-is-hopefully-better ethos of action movies. Add six weddings to the titular number in that 1994 Hugh Grant-Andie MacDowell classic of the genre (then subtract that funeral) and you’ve got ten nuptials across which the modest, frisky charmer “Plus One” brings its teasingly antagonistic protagonists (played by Maya Erskine and Jack Quaid) from the friend zone to the meant-to-be realm.

The reality, of course, is that getting invited to multiple weddings in a single year is hardly the stuff of screenwriters’ imagination, especially when one is ten years out of college, rich in coupled-up friends, and from a family with either eligible siblings or a dating parent. Such is the age-specific romance epidemic writers-directors Jeff Chan and Andrew Rhymer place their irritably single but searching characters into, and it makes for a serviceably fertile, love-surrounded setting in which to develop a winning little sleeper about the ways celebrations of love create their own unexpectedly intimate spinoffs.

But the movie’s real showcase gold lies in the magnetic appeal of screwball comedy natural Erskine (Hulu’s “PEN15”); she’s a major talent who rightly runs away with the movie, conjuring in the viewer’s head a constellation of wishful star turns to come.

Also Read: 'Plus One' Co-Directors on the 7 Phone Calls You Need to Get a Movie Made (Guest Blog)

When we meet Ben (Quaid), he’s in a hotel room practicing that night’s best-man speech for close buddy Matt (Beck Bennett), whose marriage Ben begrudgingly admits is a surefire recipe for his own impending bro-solitude. His unimpressed rehearsal audience is his old college pal Alice (Erskine), caustic and mopey in the wake of a bad breakup, and prone to razzing Ben about every little thing, particularly his insistence that “the one” for him is out there. What comes off, however, is an abiding friendship with a touch of what-if flirtatiousness.

Later, each separately endures the kind of party humiliation — Ben crashes and burns hitting on a longtime crush, Alice becomes that obnoxiously drunk guest — that cements them as floundering lonelyhearts. (There’s no real gauge otherwise as to their sense of personal fulfillment, since the screenplay never makes it entirely clear what their well-paying jobs are, outside of vague references to him being a startup VP and her having employees.)

Realizing they each have a packed summer/fall season of weddings to attend — including Alice’s sister and Ben’s twice-divorced dad (Ed Begley, Jr) each tying the knot again — and that it will only amplify their sense of toxic singledom, they agree to be each other’s fortifying tagalongs, sardonically commenting teammates in what Alice cynically calls a “love marathon.”

While there’s nothing new in a from-sparring-to-swooning scenario that has been a go-to at least since “When Harry Met Sally” (if not the dawn of the talkies), the wedding fever set-up quickly pays dividends as a petri dish for growing a believable romance. It’s also smart of first-time feature directors Chan and Rhymer to introduce intimacy into the story sooner rather than later (in a graveyard of all places, funnily enough). Seeing Ben and Alice as a couple ultimately helps with the emotional layers, allowing the peaks and valleys in the relationship — how camaraderie feeds attraction but also creates new pitfalls — to feel a little truer.

At the core of why “Plus One” keeps its head of steam, though, is the spark between Quaid and Erskine, which Chan and Rhymer tend to like alert party planners. Though Ben’s whingeing about romance too readily slips into rom-com clichés, Quaid always has the chance to overcome it when sharing the screen with the utterly memorable Erskine. Her repertoire of voices, expressions, pointed barbs and in-the-moment genuineness is the most heady, rewarding mix of salty, sad and sexy to brace one of these movies in quite a while. She’s already giving one of the great episodic portrayals as an awkward middle-schooler on “PEN15,” and with “Plus One,” her almost soulfully un-cute portrait of a strong-willed, vulnerable jokester is maybe the ultimate mash-up of the genre’s smart-ass-dame legends and its recent warts-and-all comic heroines.

Let’s put it this way: Erskine easily helps you ignore the slumps in pacing, Quaid’s struggles with an occasionally dippy role, and the directors’ flagging interest in distinguishing the movie’s various weddings (each of which are introduced with onscreen text of the happy couple’s names and event dates alongside a participant’s eyeroll-worthy toast). But the leads bring it all home with aplomb, Chan and Rhymer wisely keeping their third-act landing wry and heartfelt, focused on the chemistry that kept “Plus One” swirling with pleasure in the first place.