When snarky L.A. theatrical producers turned Kathryn Bigelow‘s campy 1991 action melodrama “Point Break” into a stage show, one of the play’s most successful gags was recruiting an audience member into the role of FBI agent Johnny Utah, with the idea that a non-actor’s cold reading of dialogue would approximate Keanu Reeves‘ legendary wooden Zen in the original.

The joke has gone too far in the new “Point Break” remake, with Utah being played by Luke Bracey (“The Best of Me”), giving a performance so utterly blank that future stage spoofs will need to cast a broom or a set of andirons in the role to duplicate what’s happening on screen here.

Generally speaking, this new movie seems to exist only to make Bigelow’s silly surf caper seem meaningful by comparison. The first “Point Break” was absurd and hyper-macho, but the director committed to the story enough to make it, at the very least, vibrantly watchable. This remake offers nothing but the absurdity, along with a handful of impressive stunt sequences that are both its reason for being and a complete distraction from what little story is happening here.

Director Ericson Core (“Invincible”) and writer Kurt Wimmer (whose previous remake duties include “Total Recall” and “The Thomas Crown Affair”) clearly want to up the ante on the action, but they make almost no effort to incorporate these stirring sequences into the rest of the movie.

When we meet Johnny Utah 2.0, he’s a cocky poly-athlete with a sports-drink sponsor backing him. After his best pal meets tragedy in a motocross stunt, Utah (real name: John Brigham) gets his GED, graduates college and law school, and attends the FBI Academy. (The plot would have us believe that a well-known athlete could pursue this path unbeknownst to the rest of the world, as though ESPN or Vanity Fair wouldn’t have been all over that story.) 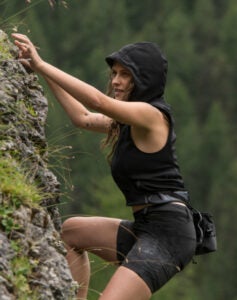 Still a trainee, Johnny’s expertise comes into play when a group of masked stuntmen pulls off a string of Robin Hood heists involving motorcycles and parachutes. Johnny deduces that the perps are trying to complete the Ozaki Eight, a series of “ordeals” that will allow those who accomplish them to reach Nirvana or bring the earth into balance or something that the movie barely bothers to describe.

In any event, the list allows Johnny to figure out where they’ll strike next, which is how he meets Bodhi (Édgar Ramírez, “Joy,” stepping in for the late Patrick Swayze), surfing a tornado-created tube off the coast of France. Bodhi opts to save a drowning Johnny rather than complete the ordeal, and Johnny ingratiates himself into Bodhi’s cadre of thrill-seekers, including Samsara (Teresa Palmer, “Warm Bodies”), who may or not be Bodhi’s girlfriend but who definitely takes a shine to Johnny.

Samsara, incidentally, provides only the slightest distraction from the movie’s central romance – Bodhi and Johnny get the lion’s share of longing looks between them, and their bare-knuckle brawl brims over with sexual subtext. (It also doesn’t speak well for FBI training, given the shellacking Johnny receives.)

With the backing of a Middle Eastern billionaire, the sportsmen tackle diving off a mountain in those flying-squirrel suits (the film’s highlight, thanks to Core’s double-duty as cinematographer, plus an exceptionally talented team of stuntmen) and snowboarding down a sheer drop of a mountainside. But when Bodhi plans to set off explosives near a gold mine, causing an avalanche that will bury not only ore-bearing trucks but also their drivers, Johnny must decide on which side of the law he stands.

If only that decision carried any weight whatsoever – Bracey’s completely unengaging performance aside, Wimmer’s dialogue offers nothing but stale cliché, whether it’s the barking of Johnny’s FBI superiors (Delroy Lindo and Ray Winstone, making chicken salad as hard as they can) or Bodhi’s inspirational-poster-speak. (“When a man pushes his limits, he eventually finds them.”)

Even the Ozaki Eight seems to be broken down into “Stuff We Need to Do in the Movie Now” as opposed to some grand scheme of completion. As it is, they simply lead from one disengaged stunt to the next, and the surfing sequences are so badly CG’d that they call to mind Kate Bosworth‘s face floating over someone else’s body in “Blue Crush”.

If some of the “ordeals” don’t involve committing a felony, why should any of them? And for that matter, why bother with this remake if you’re just going to make a Warren Miller ski documentary with the flimsiest of plot to string it all together? “Point Break,” for all its bro-koans, never provides an adequate explanation.