President Obama presented the Presidential Medal of Freedom to 16 people at the White House on Wednesday, among them the first African American to win a Best Actor Oscar, Sidney Poitier. 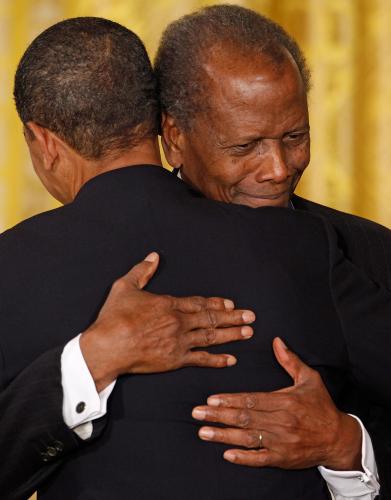 Calling Poitier — who won a Best Actor Oscar for 1963’s "Lillies of the Field" and a nomination for 1959’s "The Defiant Ones" — an "ambassador and actor," the president in a statement said he "has left an indelible mark on American culture.

"Rising from the tomato farms of the Bahamas, his talent led him to Broadway, Hollywood, and global acclaim. In front of black and white audiences struggling to right the nation’s moral compass, Sidney Poitier brought us the common tragedy of racism, the inspiring possibility of reconciliation, and the simple joys of everyday life.  Ultimately, the man would mirror the character, and both would advance the nation’s dialogue on race and respect," said the president.

"These outstanding men and women represent an incredible diversity of backgrounds," Obama said. "Each saw an imperfect world and set about improving it, often overcoming great obstacles along the way."

Obama described Rivera as having "captured America’s imagination with her magnetic presence and radiant voice."

Over a career that has spanned a half-century, Rivera — who gained fame as Anita in the Broadway version of "West Side Story" — has received two Tony Awards, six additional Tony nominations and the Kennedy Center Honors Award.