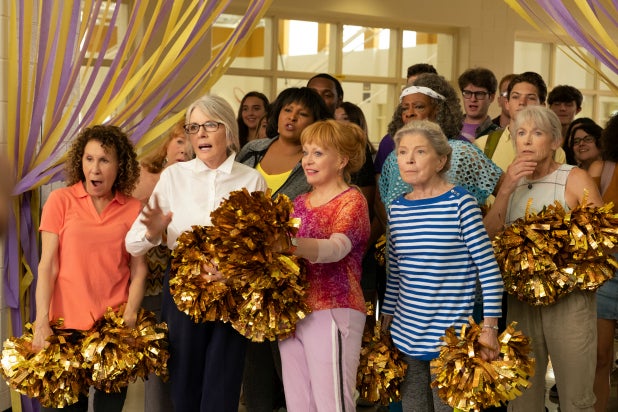 There’s no shortage of spirit among the cast of “Poms,” Zara Hayes’ new cheerleading and retirement-age comedy hybrid, but not even this much pep can cover up all of the film’s missteps. Although it’s hard to stay disappointed for long when Diane Keaton is just one exasperated sigh from making you laugh again.

Life got in the way of Martha’s (Keaton) youthful dream of becoming a cheerleader, but her fondness for the sport remains through her older years. After a grim diagnosis of cancer, Martha sells off the bulk of her belongings and sets off from New York City to a retirement community in Georgia. She’s greeted by Southern belles and by Sheryl (Jacki Weaver), an overly friendly neighbor with a fondness for pink flamingos and bright makeup. Among the many arbitrary rules of her new home, Martha must find a club to participate in, so with Sheryl’s help, she forms her cheerleading squad at last, giving her a shot at that long-delayed debut.

The script by Shane Atkinson (Hayes, a documentarian making her fiction debut, gets story credit) combines feel-good elements with a bittersweet tone. It’s uneven at times and hits a few too many clichés for my taste, but if my preview audience was any indication, the movie’s still pretty effective. Watching the ensemble come together is a heartening sight, and the chaotic audition scene feels like a tribute to perhaps the greatest cheerleading movie of all time, “Bring It On.”

There are a number of crowd-pleasing feminist moments when the women stand up for themselves and each other against old-fashioned men trying to get in their way. More than just letting Martha find a sisterhood among fellow outcasts, the movie also looks at the way cruelty exists among other women at the community and between the generations, as a group of high-school cheerleaders becomes one of the movie’s sources of tension. Despite its fluffy premise, “Poms” does touch on how people cope with grief, illness and moving on, but these scenes are brief and really only happen in blink-and-you’ll-miss-it moments.

The movie shines brightest when it gives its cast the spotlight. Here, Keaton is riffing on her flustered city-gal persona but in a more quiet and reserved manner than usual. As a single woman, she’s wildly self-sufficient and ready to do things on her own without other people’s permission. Martha decides to keep her diagnosis a secret from the group until she can’t, the first of many guarded walls separating her from really opening up to others. At first, she’s against befriending the extroverted Sheryl, but eventually, the two become close friends, and Martha’s distancing behavior melts away to reveal a more vulnerable side.

Also Read: Netflix's 'Green Eggs and Ham': Adam Devine to Voice Sam I Am, Michael Douglas Set as Guy Am I

While Keaton wrestles with the painful arc of a cancer-stricken character, Weaver steals the movie outright. As the comic foil, Weaver enhances her character’s outrageous behavior and too-honest candor with a wide smile and mischievous eyes. There are hints to Sheryl’s family problems and why her grandson lives with her, but the characters don’t really get into it, preferring instead to keep Sheryl a funny if uncomplicated presence.

While Keaton and Weaver get to have fun and more fleshed-out characters, the rest of the squad remains a bit vague. Rhea Perlman gets a little more screen time as a newly liberated woman who’s free to curse and cheerlead, but the movie criminally underutilizes Pam Grier, relegating her to only a few lines about tango dancing with her husband and defining her character as “the married one” of the group. Phyllis Somerville, Patricia French, Carol Sutton and Ginny MacColl round out the squad, each adding a different dynamic with which Keaton’s headstrong character has to deal.

Perhaps because “Poms” is Hayes’ first scripted feature, there are a few technical aspects of the movie that feel rough. A handful of shots — like cutaways to the retirement community at dusk as a transition — seem unnecessary. They’re pretty, but they doesn’t do much for the characters or the story, and it just looks cheesy. A few other shots appear mis-framed, like a tender moment between Martha and Sheryl that focuses mostly on Martha; Sheryl is almost entirely out of the frame and out of focus, dulling the scene’s shared emotional weight. Or when Keaton’s exasperation is shown only from behind, so we miss the full effect of her facial expressions. Cinematographer Tim Orr (“AXL”) plays it fairly safe, with a light touch of softened colors and focus, as through the images were styled after early-90s comedies.

There’s an attempt to venture into youth culture by adding a subplot about young love and a social media angle that feels like it’s trying too hard to connect with a younger audience. “Poms” is strongest when basking in the infectious enthusiasm of its cast. Keaton and Weaver could have easily phoned in their performances, but they do look like they’re having fun together with their crew of Golden Girls.

The movie’s positive message, that it’s never too late to do what you’ve always wanted to, is one that will likely connect with audience members of any age. Although the movie’s end suffers quite the bumpy landing, there’s enough good cheer in “Poms” to root fo Keaton and the rest of the cast as they strut their stuff and support each other.