Rob Reiner reportedly used Martin Scorsese‘s “The Last Waltz” as a template for his immortal mockumentary “This Is Spinal Tap,” and it appears that the Lonely Island (writers Andy Samberg and co-directors Akiva Schaffer and Jorma Taccone) turned an eye to “Justin Bieber: Never Say Never” when they created “Popstar: Never Stop Never Stopping.”

Perhaps it’s appropriate, then, that the gap between the two parodies is comparable to the difference in quality of the source material. Not that “Popstar” isn’t funny; the Lonely Island’s absurdist wit, which made songs like “I’m on a Boat” and “I Just Had Sex” some of the highlights of Samberg’s tenure on “Saturday Night Live,” remains as potent as ever. But while their singles were perfect for the four minutes of an “SNL Digital Short,” they’re not quite enough to fill 86.

“Popstar” is less a feature film than an SNL Digital Long.

The film brings us into the inner circle of Conner4Real (Samberg), who’s gearing up for the release of his eagerly anticipated second solo album and subsequent world tour. He first got famous with his lifelong best pals Owen (Taccone) and Lawrence (Schaffer) as part of hip-hop-tinged trio The Style Boys. But then Conner broke out with a catchy verse on a pop diva’s hit song, sending an embittered Lawrence off to a farm in Colorado while Owen stayed on as Conner’s DJ.

Conner’s new record is tanking – Pitchfork gives it a negative score, Rolling Stone rates it one poop emoji out of four stars – and the tour isn’t filling venues either, so our hero gets desperate. First he signs up for an ill-advised sponsorship deal that puts his songs in every freezer and toaster in the country – and you thought U2 plopping their albums in everyone’s iTunes didn’t go well – then he adds an opening act, young up-and-coming rapper Hunter the Hungry (Chris Redd, “Empire”), whose very name should be a red flag to someone whose 15 minutes are almost up. 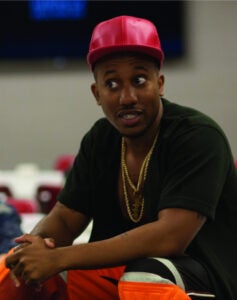 “Popstar” is at its best when spotlighting the songsmithery of the Lonely Island — whether it’s a song about the Castilian lisp, an ode to same-sex marriage (during which Conner sings “I’m not gay” several dozen times), or a rap like “I’m OJ!/I’m Simpson!/I’m Martha!/I’m Plimpton!” — and the expected parade of musical legends being interviewed as themselves brings some scattered laughs. (Mariah Carey proves rather adept in this regard.)

Where “Popstar” falters is in its lack of interest in set-ups and payoffs; the gags take place within each individual scene, and then they’re over, rather than creating any arcs on which to hang more substantial comedy. A lot of the jokes land, yes, but we don’t get the belly laughs of a movie that has bothered to construct situations or characters over the course of its running time. Sure, there’s a story about whether or not Conner and Lawrence will bury the hatchet, and about the diminished role Owen plays on the tour (he’s eventually saddled with a giant Daft Punk helmet that emits a light that can be seen from space), but these shreds of plot mainly serve as wobbly clotheslines on which to hang the funny bits.

This isn’t a film that has all that much to say about fame or the music biz – a running joke about TMZ might have landed had “Inside Amy Schumer” not done it better on a recent episode – and the fact that heavy-hitters like Sarah Silverman and Joan Cusack have so very little to do indicates that there’s a lot of this movie on a cutting-room floor somewhere. (Judd Apatow, the king of shoot-it-all-and-we’ll-see-what’s-funny-later, served as producer.)

And it’s not like we can blame “SNL” for this – the first Lonely Island movie, 2007’s underappreciated “Hot Rod,” managed to blend goofy one-shot bits with callbacks and characterization. This new movie feels more like a series of sketches that all happen to revolve around the same handful of characters.

That said, those sketches are fairly funny, and if this comedy has all the depth of a summer jam, it will eventually be the kind of late-night download that will inspire giggles for years to come. But if the Lonely Island gets another crack at the movies, here’s hoping the next one is more “Hot Rod” and less “Popstar.”